Online games have taken over the traditional games in this era. People are moving more and more towards online role playing games (RPG), action-adventure, first person shooter (FPS), and real time strategy games (RTS). Nowadays the game developers are making the game online playable rather than the traditional LAN plays.

Today I’m going to give you names of some of the most famous online games which are free to play (F2P)  up to some extent. 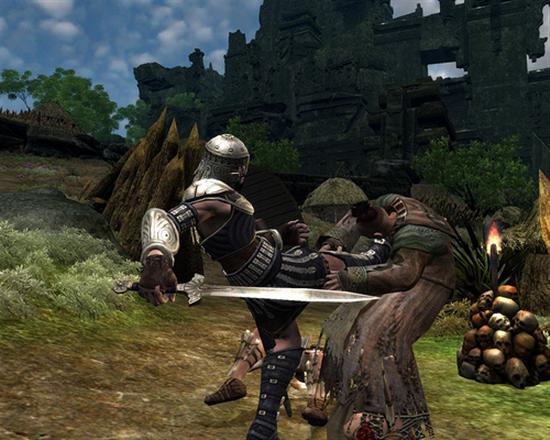 Age of Conan is famous for its combat experience, astonishing environment that makes playing the game a pleasure full experience. The game comprises of many quest which you have to complete. Though the gameplay part is very good but on the other hand the server-client has lot of bugs plus there are some lag issues also. Still this game should be played once by every RPG lover. 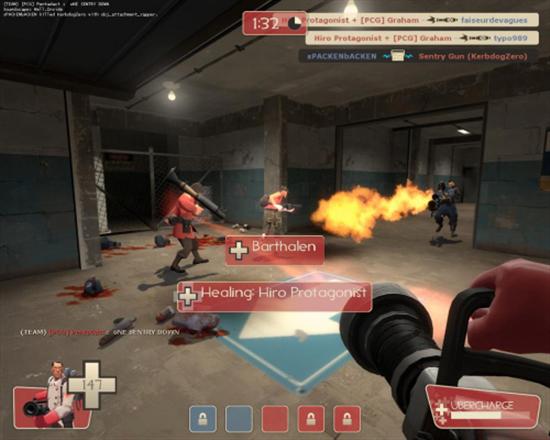 The only thing bad about this game is its cartoon like graphics otherwise it’s an awesome fun to play game. If you want information about this game you can check it out here. 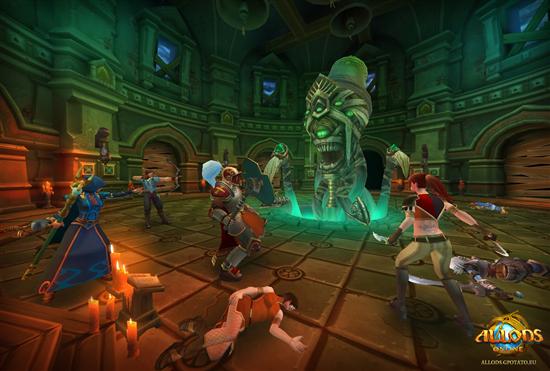 Allods is one of the major rising F2P. The game has some awesome graphics for an online game or the best visual environment in the online RPG genre. Though the gameplay is good, but if you have played games like Warhammer and World of Warcraft (WOW), you’ll notice the similarities. 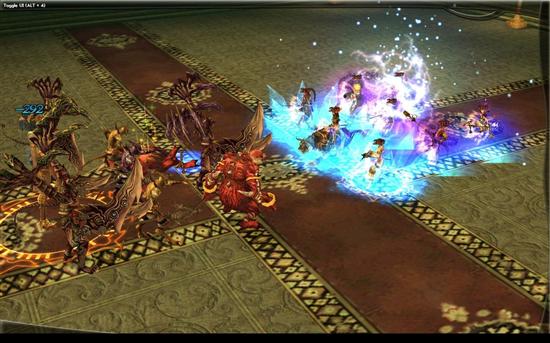 Atlantica Online was once voted the best MMORPG of 2008. The game is famous for its unique turn-based style combat, amazing high-quality graphics and sound, awesome storyline, and several player vs player combats at the end of the game. 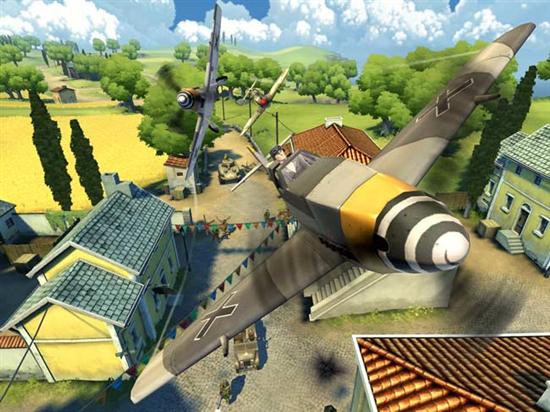 Battlefield Heroes is a 3D third person shooter with a cartoon like graphics. You can either join the National Army (the Germans), or the Royal Army (the Brits). The story is based around World War 2 era. One of the good thing about this game is its humorous atmosphere similar to Team Fortress 2. 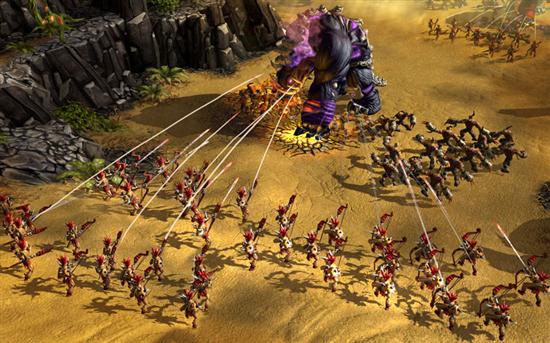 BattleForge is a 3D fantasy MMORTS game where players have to battle for map dominance. You basically use cards to summon units, structures, and cast spells on your opponents. The best about this game is that its fast-pace game compared to other RTS games. Though the gameplay and graphics are good but the repetitive scenario and poor storyline will make you feel bored. 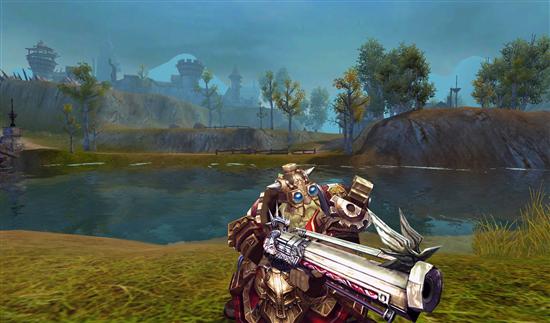 Forsaken World is a 3D fantasy MMORPG based in the world of Eyrda. The game has about 5 races, 8 classes, guild battles, and over 10 occupations. One of the good thing about Forsaken World is its duels between the clans or players. 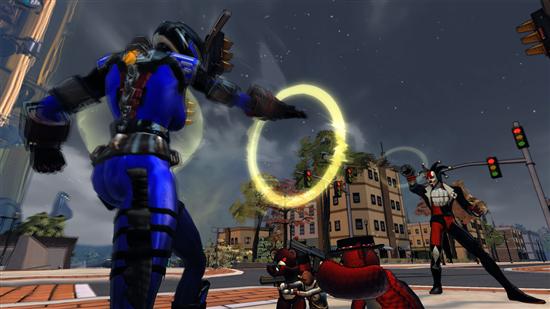 As the name suggests Champion Online is a 3D superhero-based MMORPG. You create a unique superhero and play it through the different story quests. The game has amazing graphics with awesome character details. The game is more fun to play as it’s an action oriented game. 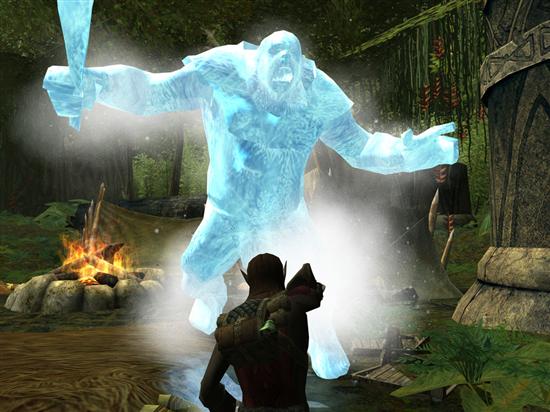 Dungeons & Dragons (D&D) Online is a 3D fantasy MMORPG based on the classic D&D tabletop RPG.  The game has some awesome graphics with detailed characters, fast-paced gameplay and in the end its Dungeon & Dragons you’ll play it for hours and hours continuously. 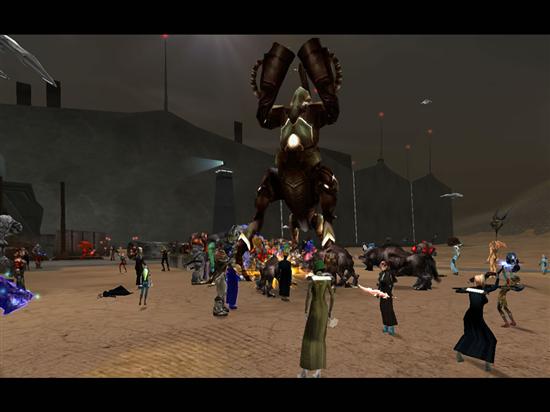 Anarchy Online is 3D Sci-Fi MMORPG which has four playable races and 14 classes to choose from. The game is good to play because of its large world and good skill system but if you’re among the people who want graphics with good gameplay than this is not the one for you as the game has outdated graphics. 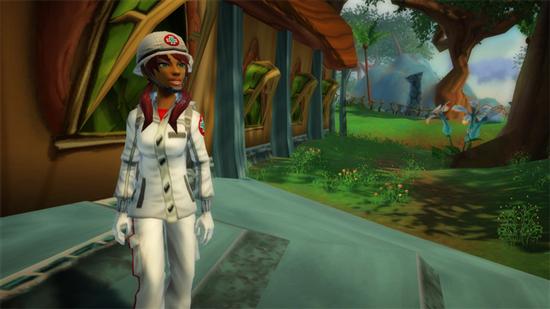 Free Realms is a 3D fantasy MMORPG with bright colors and large game world to play. This game is aimed more towards the younger generation, though the game is enjoyable by players of all ages. Each character is capable of playing many professions and can participate in numerous mini-games. Another good thing about this game is its numerous quests which make you to play more (I meant this for the younger generations some people may or may not like this game at all). 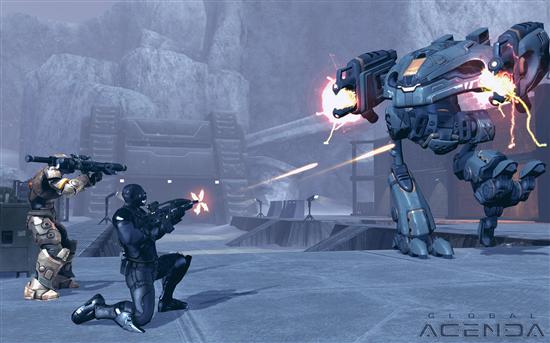 Global Agenda is MMO shooter game with intense fast paced combat that will surely satisfy you. The game is a third person shooter game allowing you to team up with your allies to complete missions, claim and defend different areas, and destroy other players. You can choose from four classes: Assault, Medic, Robotics, and Recon. The only bad thing about this game is the repetitive missions. 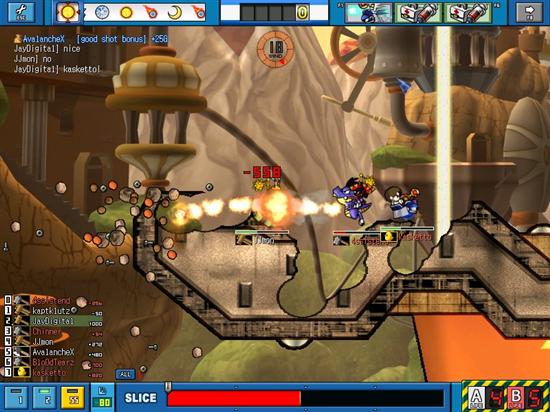 Gunbound is a 2D turn-based tactical shooter MMO that is quite similar to classic game Worms or Pocket Tanks. The game objective is to hit our opponent with the correct angle across the map. This game is best for people who don’t have enough time to play or office people who just want to ease themselves up. 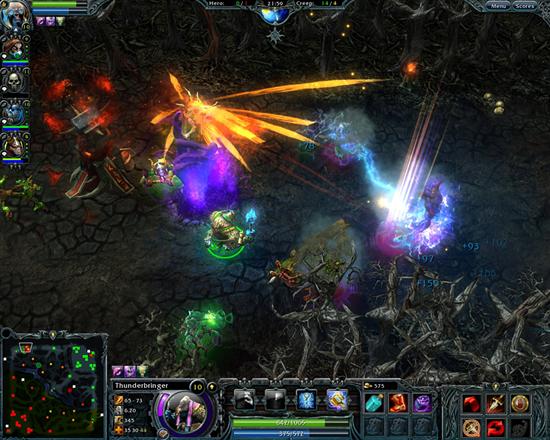 Heroes of  Newerth (HON) is 3D fantasy MMO game which is quite similar to Defnse of the Ancients (DOTA) in all aspects. The game has awesome graphics and good gameplay. The time I played this game the heroes were quite limited but if you’ve played dota you’ll notice the similarity. You get to choose from many heroes each having different uses and skills. The game is player vs player and you have to control three lanes. 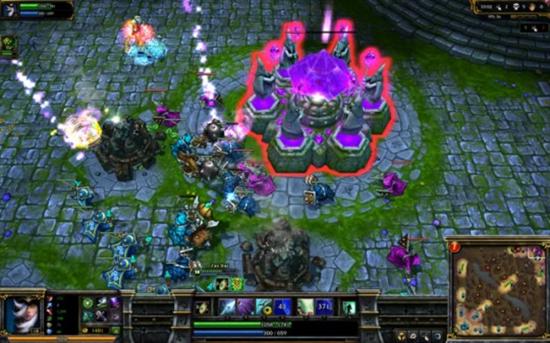 League of Legends is quite similar to HON and DOTA. Here you choose from one of many champions to fight against enemies.

16. Lord of the Rings Online 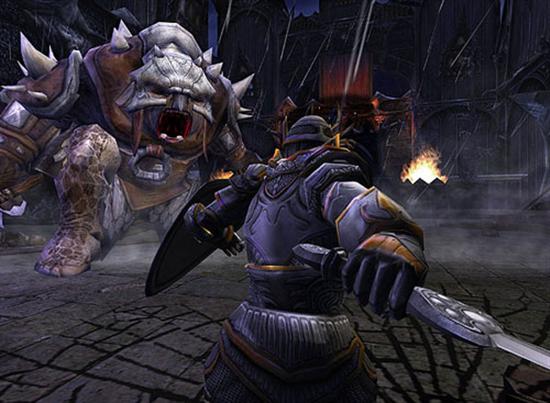 Lord of the Rings Online is based on the famous novel Lord of the Rings. The game is awesome when it comes to graphics and storyline. Other than the story part you can choose from different monsters to play from. The game has some exciting PvP and massive game world. 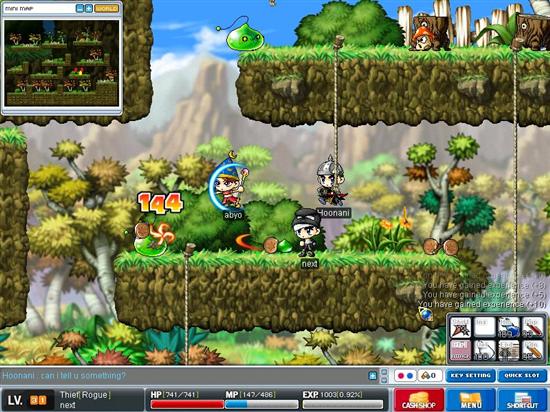 Maplestory is a 2D side-scrolling fantasy MMORPG with cartoon like graphics. Though the game looks like a child’s play the games is one of the most popular F2P MMORPG. The game has a very large world, has many classes to choose from, quests for the whole party, and much more. It is even believed that Maplestory was practically the first successful free MMORPG. 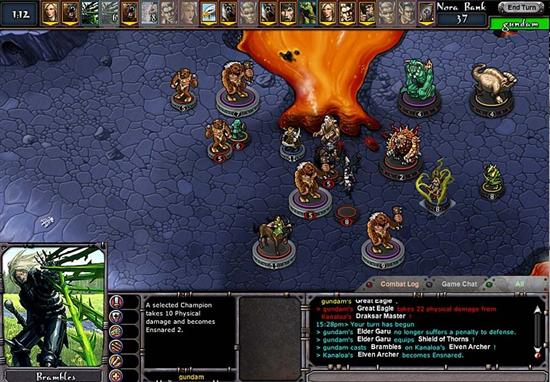 PoxNora is a collectible, turn-based, tactical, online fantasy game. Here the players commands armies of creatures and cast powerful spells by using dark magical runes. The game is turn-based and involves two participants. You can either play against other players or complete single player missions. 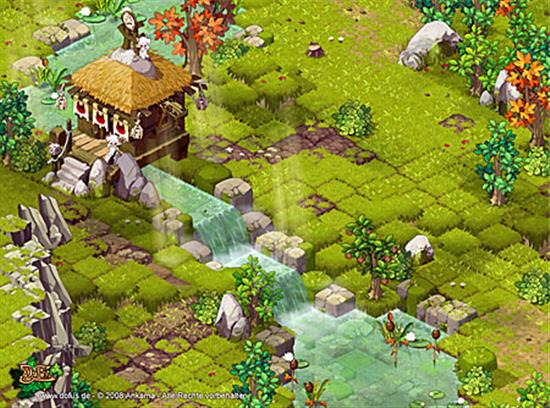 Dofus is another one of the cartoony graphics 2D fantasy MMORPG with turn based combat. You can choose from variety of classes. The game has a very vast world with crafting & merchant modes, and guild based PvP. Dofus uses Adobe’s Flash Player so it can be played on any system. 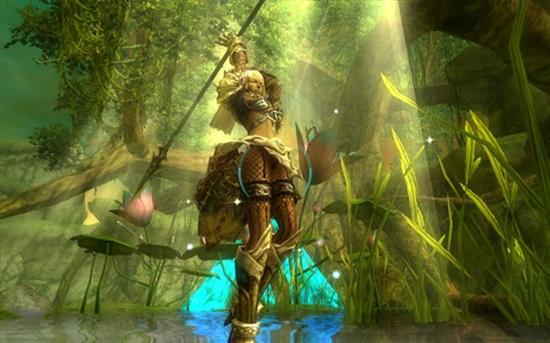 Prius Online is a 3D fantasy MMORPG that offers a unique three character system. Players become heroes and are accompanied by a young girl Anima on the cursed planet. The game is interesting to play because of its challenging quest, hard fights with different monsters, and battle with other players over the network. The game also has stunning graphics with an advanced AI. 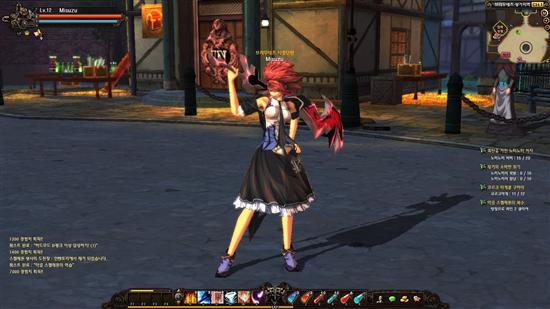 Rusty Hearts is 3D action MMORPG with a fast-paced gameplay. It features awesome graphics with various PvP modes. It also supports cooperative gameplay. It is 3D brawler MMORPG with an anime inspired graphics. 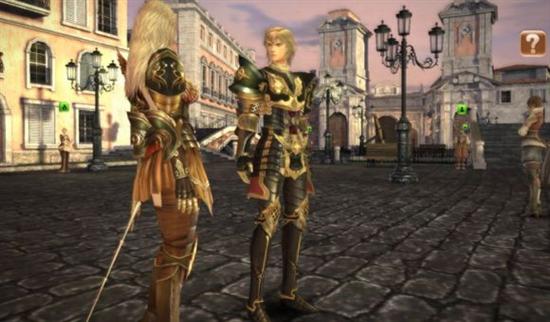 Sword 2 originally called as Sword of the New World is 3D fantasy MMORPG that has some RTS elements in it as well. Players get to take control of three separate characters at the same time through the magnificent world of Orpesia. 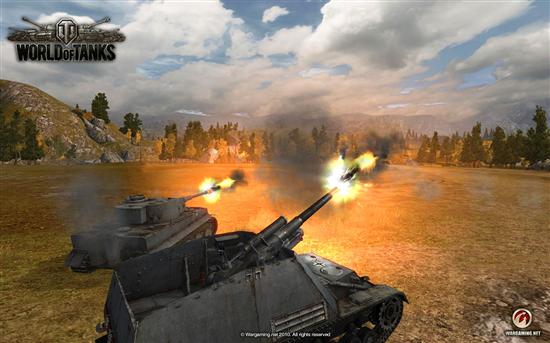 World of Tanks is a 3D team based MMO shooter where players get to take control over World War 2 era tanks. Gameplay is simple you just need teamwork and strategy. You can choose from over 100 of tanks and up to 60 players can battle in a single event. 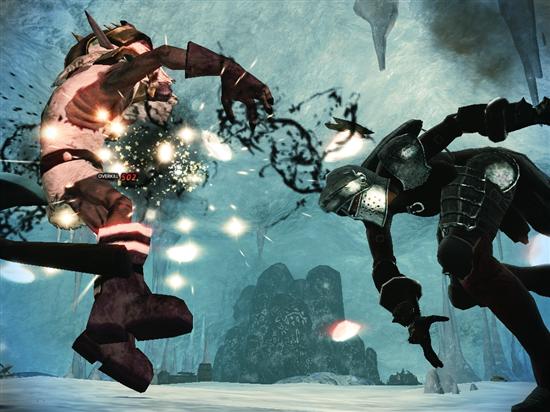 Vindictus is a fast-paced 3D MMORPG brawler. The game is based on Celtic mythology. The game have realistic graphic with hack and slash gameplay.  The game action packed environment doesn’t lets you leave the game.