Facebook lets your Friends mention or tag with your Name. Instead of Full name, they can cut off Last Name and make it just First Name or Vice-verse. But Do you know, it is also possible to let your Friends tag you by Nick Name or any Name you like.

Using Pet names among friends is a common thing that we all generally do. It not only makes conversations funny but also the environment created is same as when being with close group of friends.

This is made possible using the inbuilt Facebook Feature of adding “Alternative Name” in your Profile. 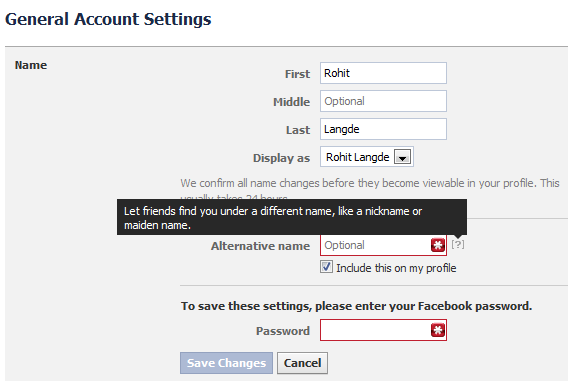 Here, you can enter Alternative Name which could be your Nick Name, Name which you love being called by Friends or any Name by which you are known in society.

Add New name and Save it. It will take 24 Hours to take effect globally on Facebook.

Once you are done, your Friends can tag you with Nick Name like the way they did. I mean by beginning the name with “@” followed by Alternate name.

Prediction shown while typing nick name is the Real name but after selecting the that name, Tag will be of Nick name itself.

That’s all, it was no tough job.

This is helpful because most of friends will remember you by the same nick name if you have one and facilitates them tagging easily. Also, if we look at our side, it feels good that close friends calling you out by the name they do in real world. So, get that closeness in Virtual world too.

Thanks for this important information