With the launch of the new Google operating system- Android 4.0 Ice Cream Sandwich, all owners of a tablet are anxious to know whether their model will be the lucky ones to receive the update. We tried to take a look of the situation and listed some probabilities.

At present, giving a brief look at the market, we realize that at realization of hardware equipment and devices in each segment are roughly equivalent. What makes the difference is usually the operating system and value-added services, such as an App Market or online payments. Every time a new version of operating system debuts brings with it several new features and not only bug fixes, usually allowing a significant leap in quality that the device will take.

Here are 5 features that I liked about Android Ice Cream Sandwich which might be also the reason of your curiosity to upgrade.

To market, the policy choices of individual manufacturers decide whether to allow updates to a product already on the market or not, perhaps to encourage the purchase of the new version that is about to debut, in fact, making the existing one obsolete.

Since the release of new Android 4.0 Ice Cream Sandwich, all are anxious to know for sure if your tablet, maybe bought from just a few months, will be among the fortunate who will receive the update. The terminals on the market are now different and there are only some official news. We then tried to take stock of the situation.

We start from the family of ASUS Eee Pad, which now includes Eee Pad Transformer and Eee Pad Slider, with regard to the tablet with Google Android. The giant has already announced that the upgrade will be available for all products in the family, but at the moment is not yet able to communicate a specific date.

The update should then also apply to Eee Pad Transformer Prime, which will be officially announced only on November 9.

But bad news for owners of an HTC Flyer. The Taiwanese company in fact did not even updated its tablet version to Honeycomb 3.2, and leaving it stuck at Android Gingerbread OS 2.3, so the chance of an upgrade directly to Ice Cream Sandwich are rare.

HTC has announced only in general terms that will try to upgrade to the latest release of Android as many devices as possible, but the company is also known for preferring usually to market entirely new solutions rather than upgrading existing products.

In this case, however, HTC Flyer and Jetstream are the only two available tablet and HTC, unless the company has already prepared new models in the short term, it could also decide to update the current. The situation is further complicated then, for all producers, the fact that Android Honeycomb and Android Ice Cream Sandwich and do not differ much for the code base, while the differences are huge with Android Gingerbread, so all devices with the Gingerbread will have more difficulty in moving to the latest version of the OS. If you then added the presence of custom interfaces, which would make it even more difficult to upgrade, hopes diminish even more. 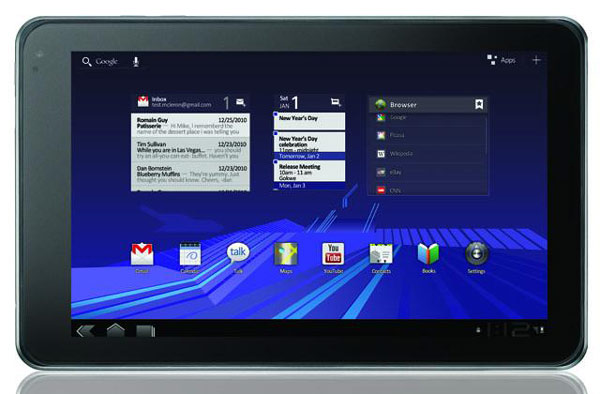 Doubts also about LG Optimus Pad, which had lukewarm response due to the inconvenient software interface and working. In the absence of official announcements users can hope, but it is said that LG decides instead to invest more in the construction of a new model entirely.

As for the Acer Iconia Tab A100 and A500 , the situation should be similar to that of ASUS. The Chinese giant said that it definitely will update its tablet to the new operating system, but currently there is no precise official data, although some sources report points to January 2012.

Good news for owners instead of a Motorola Xoom . The U.S. company because, as in the case of the ASUS and ACER, has officially announced that all its Android-based products will be upgraded to the new operating system, only lacks a precise date. The Canadian company, however, has promised an update within 6 weeks (1 month and a half) the availability of the OS.

Additionally, this was listed as a best alternative to iPad 2.

No official announcement yet by Samsung. At present, it is difficult to imagine that the first, original Galaxy Tab 7-inch will never be updated, considering the time from which it is now on the market. While, there is more hope for the Galaxy Tab 10.1, which otherwise could not compete with its own, Motorola Xoom or the recent Galaxy Tab 8.9.

Still, there are even official announcements about the Toshiba Thrive, the Lenovo ThinkPad and IdeaPad, the Archos 101, 80 G9 and G9, with the Amazon Kindle Fire and Barnes & Noble Nook Color 2 , although the latter two update is really a rare possibility. The last B & W is about to present a new version and for the first because the operating system Gingerbread 2.3 is equipped with an interface customized so that it is almost impossible to upgrade.