Apple Doesn’t Deserve An Apology For iOS 6 Maps: My Reply To Tim Cook

People who upgrade their iDevices to iOS 6 already know what kind if fail is Maps application. People already started making gags and memes on it like they made fun of iPhone 5 itself. News is, Tim Cook (CEO of Apple) apologized for the blunder in iOS 6 Maps. But Sorry Tim Cook, I refuse to accept your apology.

Apple is now sorry about frustrating their users with wrong data on Maps. Actually, they should apologize for not giving options to user and forcing them to use inferior app.

I remember Steve Jobs’ words in his Biography–

“I’m going to destroy Android, because it’s a stolen product. I’m willing to go thermonuclear war on this.”

And Apple Maps in iOS 6 is a result of this war. They just did not want their customers use competitor’s product (Google Maps) and hence removed it from their app store. Isn’t this behaviour silly or rather childish?

I agree that a product cannot be a huge success (accurately correct in case of Maps) in its first attempt but requires gradual development. Similar is the case with Apple Maps and Tim Cook admits it in his apology letter. But still, they removed Google Maps from their App Store to force their users to use Apple Maps. Doesn’t it mean that Apple gives priority to Competitor than its customers?

Dear Tim Cook, if you are developing your own maps, we don’t have any problem. But, by the time your product is completely ready to fulfill the user needs, why don’t let them use an alternative? Do you really expect customers to use almost anything you throw at them?

Now, it would be shameful to bring back Google Maps to App store. So, instead you simply recommended pinning Google Maps website to home screen.

Personally, my experience with Apple Maps is very bad since the day I upgraded my device to iOS 6. Not just most of the places aren’t listed but those, that are listed, are located at wrong place.

The place where I live has no locality, no neighbourhood and just a deserted area besides National Highway according to Apple Maps. 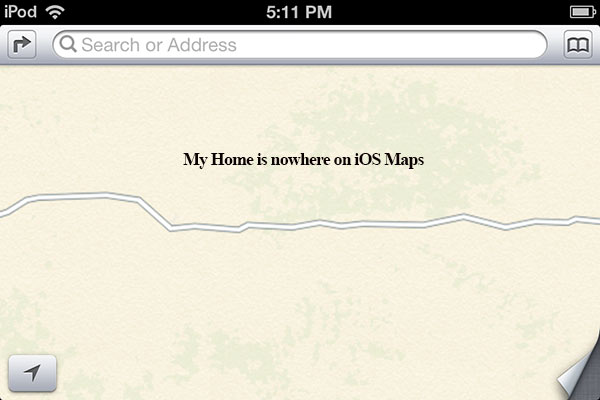 Well, this is just one of the example. You can find many such funny, (mis)located places on iOS Maps.

What does it tells? Apple simply wants to control what their users use. Day isn’t far when Apple will remove YouTube and Google Chrome from App store. And what for all this? Just to destroy Android?

Apple, as a company, seriously need to change their attitude. Simply, sidelining your competitor doesn’t make you a winner. And winning doesn’t mean you are offering benefit to customer (Reference: How Apple’s Win in Patent War Will Affect You).

Apple really did a big mistake by integrating their own Maps app, it isn’t even developed up to an extent to be used by the people as a replacement to Google Maps.

Why on earth would you stop using Google Maps in the first place? When the iPhone first came out, maps.google.com was not smartphone savvy. Six years later it is, and everyone’s free to use it—just not as a native app (which Apple would soon have to pay royalties for).
If I need turn-by-turn directions, Apple Maps is much better than Google’s. If I don’t, I use Google. It’s that easy.
Still, I think Apple underestimated the effort it takes to collect decent map data. I always admired Google for that.

Exactly Joe, Apple lagged behind in terms of collecting decent map data which is main reason that people will rely on Google Maps (even you).
I still wonder why this blunder happened when map data provider is TomTom (popular GPS device maker).