Apple has officially unveiled iOS 5, the new major version of its mobile operating system, presented during the annual Apple World Wide Developer Conference (WWDC). It consists of some 200 New features including the ones demanded and expected since long.

Among the notable features, it includes the ability to synchronize wirelessly iPhone, iPod touch and iPad to computers via Wi-Fi, without having to physically connect them.

iOS 5 offers native integration with Twitter. Users can now find Tweet option in many existing applications like Photo viewer, contacts, YouTube, Safari, etc. This version of the SDK will allow developers to easily integrate this identification centralized applications, and offer users the ability to more easily Tweet content related to their applications. 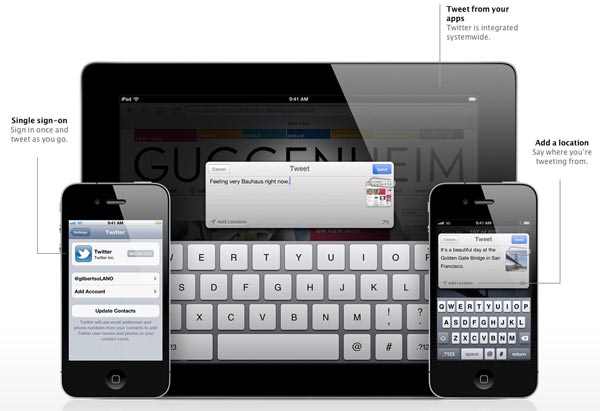 The default browser Safari Mobile finally has tabbed browsing, more ergonomic on the iPad. Safari in iOS 5.0 offers a feature called “reading list” that allows you to return to the selected page later, without making it in this bookmark.

A new service (and application) called iMessage appeared on iOS 5. This is an instant messaging application (more similar to BlackBerry Messenger ) compatible with all devices in iOS, which operates on both 3G and WiFi. Photos and videos can also be sent via iMessage.

iOS was criticized for interrupting with popup notification but now, with iOS 5, Notification center is introduced like Android. All warnings on the phone, messages, emails and similar ones will comes under Notification center which stays on top and you can access whenever you feel like. 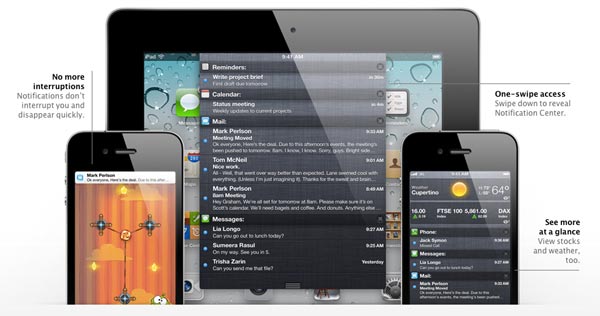 The new “App Reminders” at first seems an nth application to list the tasks, but it has a major advantage: to set reminders linked to loccation of the user. Reminders will detect the location of the device and alert the user at the right time.

Accessing of Camera is made more quick bypassing lock screen which increases readiness to capture photos. You can now use the volume control button as Camera Shutter button that allows you to bypass the screen lock, while not forgetting the protection of existing photos.

Game Center has become more friendly to social networks. Now it makes it easier to share with friends and play games with them.

Take a look at the Demo Video to get idea more clearly:

With such great features in iOS 5. User experience gets even better.
The geo-fence feature in reminders is very innovative.
Apple has done a great work.

I always wished to own an apple product! but sadly, my pocket is empty!
I get sad when I see such products :(..Anyways, the new ios looks cool and I am sure people will love it!
Great Post!
Cheers!!

This information useful for me , now i can buy my new apple iphone ……Thanks for your kind information.

Dude, I’ve got iPod Touch 2nd generation. Sadly, I can’t upgrade to iOS 5.. 🙁
Can I upgrade my iPod Touch 8GB model to 16GB?? Also, I don want to buy Kingston’s Wi-Drive for the same… 🙂
Nice Website by the way!!
Cool tips with updated tech news… Keep going like this!

8GB to 16GB.. That’s a Hardware Upgrade or I say complete Device change.