Rovio, the developers of popular game Angry Birds have released another game called Bad Piggies. It has those same pigs from Angry Birds but the game play is completely different and doesn’t involve slingshots. But then question arises is it fun and addictive like Angry Birds? Check out Bad Piggies review to know more. 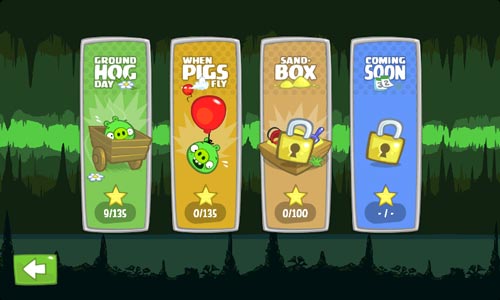 You need to build a piggy cart using the tools provided. These include wooden box to hold, wheels to move in initial stages while there are some additional tools like air bellows, spring, TNT Dynamite and fan to push.

Build a cart for pig and move to finish line keeping the cart undamaged and pig inside it also collect goodies on the way. 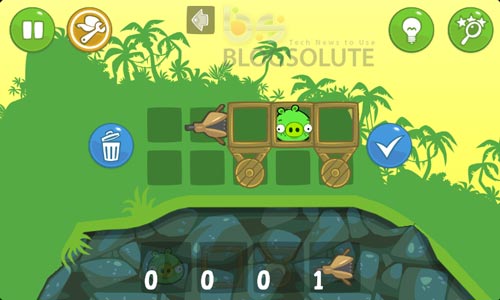 It took me few minutes to figure out myself what exactly has to be done. Though, they tried to make initial stages easy but still it is difficult especially if you want to score all 3 stars which requires collecting all goodies.

To be honest, you may get frustrated after 2-3 stages in first stage itself. Not because you aren’t able to pass the stage but if you want to score 3 stars (like me) then frustration will be there for sure. 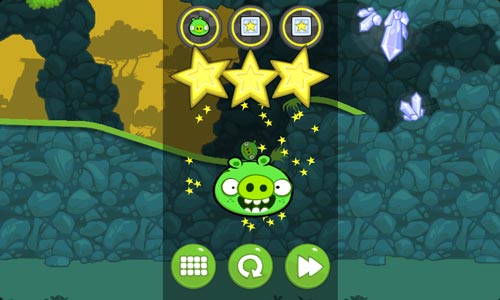 Comparing with Angry Birds, Bad Piggies isn’t really any match. Reason is its complexity. Even a 4 Year old kid could figure out Angry birds himself on my iPod and enjoyed slingshot with birds. But this Bad Piggies requires some brain work. So, it is not about fun but requires mental work.

The above description was about Ground Hog but there is another stage called “When Pigs Fly“. Pig will fly if you attach them with balloons and you will have to burst them at specific point so that they fall exactly to grab the star goodies on ground. 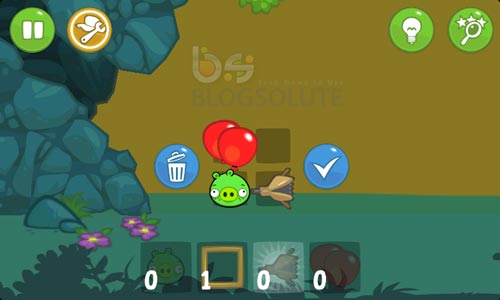 Mission is similar but the only difference is Pigs travel by balloon instead of wooden cart.

Bad Piggies isn’t any simple game for pastime but for people who love challenges. Involves mental work and creative strategy to complete game stages. About the game background sound, it isn’t appealing or crazy but not offbeat. Personally, I am not a avid mobile gamer and play only in free time. So, I will skip this one and prefer a game as simple as Fruit Ninja or Contra for Android to get rid of frustration.

Bad Piggies is available for free download for Android while 0.99$ for iPod/iPhone and 4.99$ for Mac. Windows 8 app and Windows Phone compatible Bad Piggies will be available soon.

Did you like it? Were there any problems running it on your device? Let us know by commenting.

Theme of Bad Piggies is more in tune with the times we live in – thieves are heroes in today’s world.