What is BADA File extension for Apps? | BADA File system

BADA is an operating system for Mobile developed by Samsung Electronics. People possessing Samsung WAVE still search for file extension for BADA so that to download Apps and Games.

Unlike Android has APK / Symbian has SIS or iPhone has IPA, BADA doesn’t have any single file extension. BADA apps consists of several files and not packed in single file archive / package like other Mobile OS does. 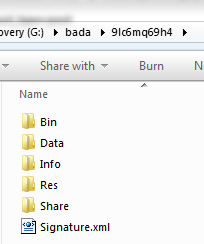 I hope the question is clear that BADA doesn’t rely on any single file extension but the apps and games (if you are downloading from web) comes in RAR or ZIP archives consisting above files and folders.

Though Themes are different from Apps and can be installed manually or design yourself using BADA Theme Designer.

So, how to install bada apps???

I just found a working version of whatsapp for all Samsung wave series here http://whatsappforbada.wordpress.com

it has worked in my bada smartphone.