With Powerful apps, Android Phone can be converted to almost anything. The hard part is actually finding the proper application to get the best user experience, whether it is a reader for smartphone or tablet, and that suits the specific characteristics of the device. We will discuss the best applications available for it.

We recently learned how to play PS1 Games on Android and now we are sharing best apps for reading Comics on Android. 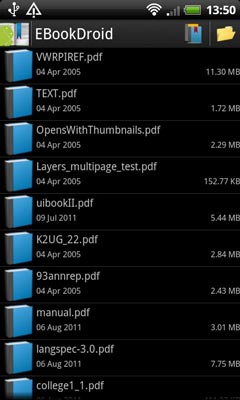 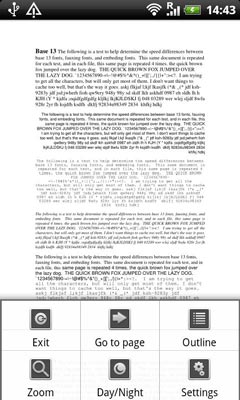 EBookDroid is a very simple and free, designed to read a lot of file types, including typical comic files CBR and CBZ. The application can read data directly from files in the device memory, so it will be our job to choose the best way to organize them.

The display options are very limited, but sufficient. Although it includes a fairly wide range of animations for transitions between pages, reading files is reduced to a viewer of the page to full screen with possibility to zoom on the page, something very important if it is a small screen, as of a smartphone. The load times of pages, even for graphics pages are quite fast.

In its favor, in terms of technical aspects, we can say that, although it is not a light reader (1.6 MB.) Allows installation on the SD card and is available for all versions of Android from the 1.5. Therefore it is a simple and functional phones and tablets recommended for low-end. 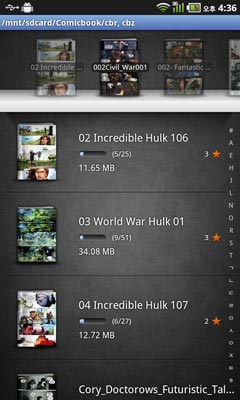 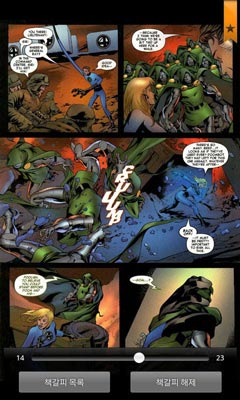 Simple Comic Viewer , as its name suggests, is another extremely simple application for reading comics on Android devices. In addition to the CBR and CBZ common, this application allows graphics folders directly read JPEG, BMP, PNG or GIF or compressed folders in ZIP or RAR with the same content. Unfortunately, despite taking no more than 2 MB. This application does not allow installation on the SD memory, so it is not recommended for low memory devices.

Although it includes the option of zooming in on the screen, a must for displays smaller than 7 “, the interaction with the graphics is not very fluid and can even be somewhat cumbersome. However, for large screens, such as tablets, in which this functionality is not absolutely necessary, because comics page is almost full size, this deficiency is compensated by the system of saving application data which is very well worked.

Despite the cons, its characteristics make it a great choice for mid-range Android tablets with screens above the 7 “which zooming is not very necessary, and with System 2.1 or higher. 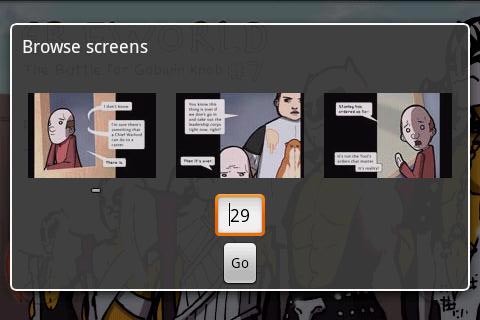 Droid Comic Viewer is one of the simplest comic book readers of the Android Market. It occupies only 350 KB. the device’s internal memory and therefore, despite not being able to install on the SD, not an overload capacity of devices with little memory.

This application does not include special attractions outside its simplicity. Given that includes the functionality to zoom in on the screen and load the last comic in the position where the reading was abandoned for the last time, meets all the basic needs of any digital comics reader. The response to user interaction is more than correct, and despite not being able to manage collections of comic books, comics and other viewers may be the best choice for casual digital comic readers or devices with few benefits. 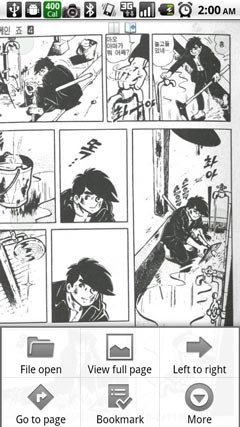 jjComic Viewer , similar to the above, it is a very simple application, whose aim is also to be very practical at the same small footprint on the phone memory. Although it incorporates some more properties, it remains a basic application with zoom for viewing files on Android CBR and CBZ.

The major advantage over the previous is the addition of navigation between files and reading from right to left, for the correct display of the manga. Thus, by maintaining a collection of volumes in the same folder, you can easily navigate through volumes without having to redo the process of finding and opening the file in the device memory. Similarly, the zoom operation is more fluid than in the previous application. The biggest drawback, however, is that despite being a lightweight, less than 600 KB. Can not be installed on the SD memory, occupying memory, in low-end devices is often a luxury. 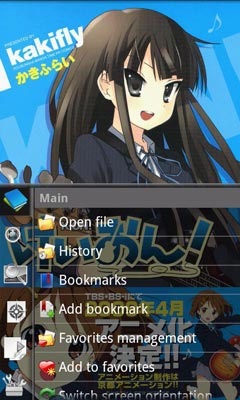 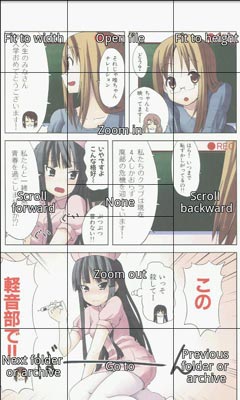 Perfect Viewer is one of the best free readers of comics for Android, if not the best. Not only because they read a variety of formats, but the large amount of functionality that incorporates this application is one of the best value in the Android Market.

This application incorporates the ability to associate a directory of the SD card as a wrapper library files. Once paired, the contents of the library will appear in a cover to facilitate access to the collection of comics that the removable memory. The zoom, page turning and scaling are spotless and are complemented by a host of special features, such as a bookmark system, the ability to save the last viewed page of each comic, or advanced navigation between volumes. The system of access to all the options (which are few) is simplified thanks to a special menu categorized and very intuitive, and a system of shortcuts, depending on the region of the screen to interact, make a or other action on the file in use.

Although it occupies 1.8 MB. in memory of the device, which is something, Perfect Viewer allows you to install the application on the SD card, making it highly recommended even if the internal memory is limited. Furthermore, since the minimum version of the system is Android 1.6, is available for both low-end devices, to high-end devices. Although there is paid version of this application, both versions include the same functionality. 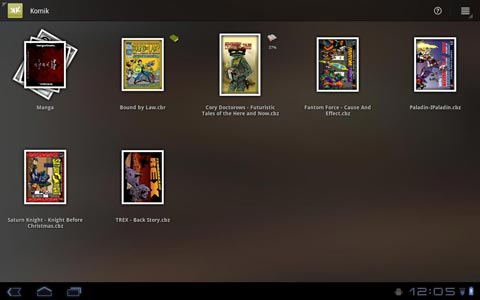 Komik Reader is a comic book reader simple, yet powerful, specially designed for tablets with Android Honeycomb or higher. Because it is designed with large screen resolutions, is best suited to screens 7 “and 10”.

The system for managing collections of comic books, keeps a gallery similar to the image gallery of Android, with icons of the covers of each comic. Like other readers simple, incorporates the functions of zoom and page turn, the latter being particularly interesting because, in addition to viewing two-page if requested, the browser page to view a preview of all pages available to choose precisely which part of the comic want to access. Also incorporates the Autosave reading position, so the next time you open a comic book, start where they left off last time.

If all this were not enough, Komik Reader is an application constantly evolving and highly supported by the developers, so that updates are distributed regularly, and much attention to user feedback in the forums. In addition it is a very light (below 800 KB.), Although this is not as important as the Honeycomb tablets on the market that have enough internal memory to hold a lot of applications. 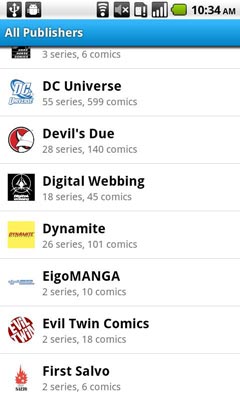 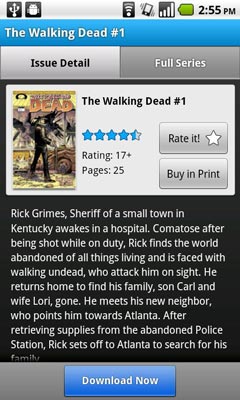 Comixology and the specific version for DC Comics are without doubt the best payment applications to read comics on mobile devices.

Although the application itself is free, in reality it is not only a system of reading comics, but a small virtual marketplace for digital comics. The system has been devised Comixology can buy, as if it were a kiosk, the most anticipated comics, especially DC Comics, digitally, and incorporated into the user’s library. The system goes beyond the traditional view, which shows the entire page and allows you to zoom, and uses an interactive display system, which is leading the user panel by panel for viewing much more attractive.

Thanks to you I discovered Komik Reader!

I was using Droid Comic Viewer (ACV) and Perfect Reader.
ACV often crashed on me, particularly on some CBR/CBZ pages.
When that happens, I use Perfect Reader, which is a misnomer. It’s SOOO slow, and threatens to crash (“Force Close” or “Wait”) when I click on it too fast.

So I looked and found Komik Reader. It’s fast and smooth! and lets me continue reading from where I left off. But I’m still waiting for: page saving and online sharing. I’m sticking with Komik for now :’)