Dock bar is a launcher on desktop with a row of useful applications originally derived from Mac OS. Some Widows OEM may have these docks on desktop and I am sharing one such eye catching useful dock called Nexus.

Not just launching but you get other interesting functions too right from dock. 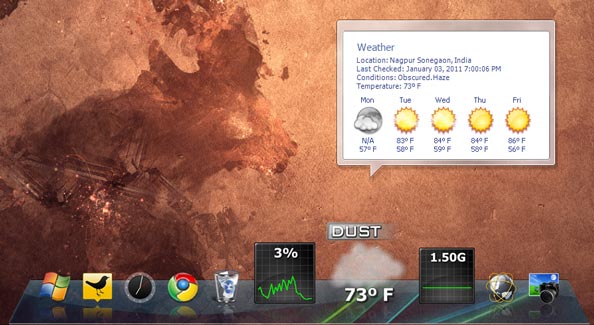 The first thing you notice is its design, very stylish with a number of themes to customize it, and we can tinker with the settings enough to fit on transparency, style, size and effects.

We can also add widgets to the dock to show us the performance of the system, the weather or even allow us to capture the screen.

In addition, we include in the system tray dock, show previews of the applications or drag and drop from the dock itself to any element.

If you are not happy with the taskbar of your Windows version, Nexus Dock is a very interesting alternative. In Nexus Dock, what surprised me most is so advanced settings it offers.

Well, I was overall impressed with the dock but it’s smaller icon size would have created more impact.