Connecting two GPRS mobile connections at a time to Computer with a thought that Internet speed will be doubled. Yes, I tried doing that out of curiosity but it simply didn’t work out that way. Only one connection at a time (probably the powerful one is taken into account) is possible.

Not just me but even my Friend and Loyal follower of Blogsolute, Sushil Kathpalia of Softwarezone always wanted this. A software solution to combine multiple internet connections and get the maximum possible speed out of both.

And Connectify is going make this dream come true by developing a software for the purpose called “Dispatch”.

Connectify is already known for their Hotspot product which was big success and now they have come up with idea of Dispatch.

How Does Connectify Dispatch Works?

Dispatch lets you connect to multiple Internet Connections say Office Wi-Fi and 3G from Mobile at a time. So, your total speed will be the resultant of the sum of speed offered by each one of those.

For example: Wifi offers 350 kb/s Download speed and using 3G, you are getting some 200 kb/s. Then, total download speed will be: 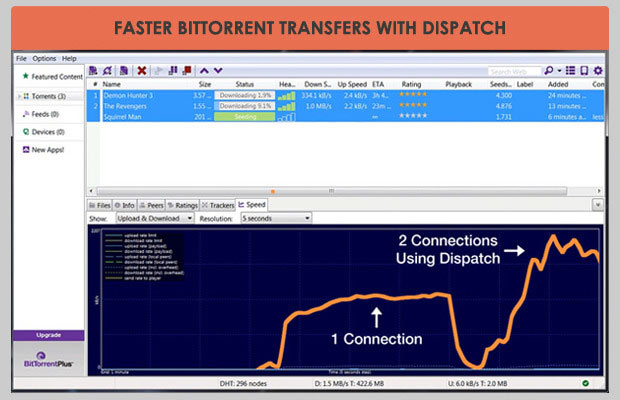 When you are at airport connected via Wifi as well as 3G but Wi-fi connection is unreliable (disconnects often). In this case, Dispatch will continue to connect to Wi-Fi and when problem occurs, it will seamlessly switch to 3G so that your work doesn’t get interrupted. You can get Airport Parking when traveling so that your car will be secured.

Also, as soon as Wi-Fi becomes available, it connects back to it disconnecting 3G. In this way, it offers reliability and saves data bill too.

Support this Project to Bring it into Reality

Dispatch isn’t available for download because it isn’t reality yet. It is an idea which is pledged on Kickstarter which helps to gather funding from people for development of project.

Connectify has core technology, development idea in mind and what all they need is your help in funding. They have pledged a goal of $50,000 for this project starting today and will end on 7h Sep 2012 on Kickstarter.

Contribution can be as small as 1$ plus they have various other offerings if you pledge more than 10$. It includes free license of their existing product “Connectify Hotspot” and many more.

Project is already pledged with more than thousand in a day and it will be successfully funded only if they reach 50,000$.

Till the time, it becomes available, you can increase download speed on torrents by making simple changes in settings.

Really, me and my friends always wondered about this exact thing. It will be wonderful to see this project LIVE. Particularly not to mention the usefulness.

Thank you for sharing.

Thanks Rohit for making a blog post within in some hours and also by making this article you contributed this project already….

It’s a dream of many people like me. I think this technology is already on use. Once I saw a TV reporter had connected many USB modems to his instrument for the live telecast.

Are you sure those were USB Modems? Maybe he was using them as memory storage or connected multiple to check the fastest / reliable connection. Because, I don’t think this technology is already available.

hi rohit,
I am also curious about this trick, and I have tried a it but unsuccessful.

and one thing more ,

In last line (“Where to buy Succesful Kickstarter Funded Projects”) you have mistyped successful spell. Please correct it.