Windows 8 has been released publicly for a long time now and since then activators have started floating around the web. P2P networks and File sharing sites have variety of Keygens and Windows 8 permanent activators. But, do they really work or activate Windows 8 genuinely like in Windows 7?

I tried hands on some Windows 8 crack tools and procedures and found many of them as fake. Here’s how you can identify the difference between genuine activation and pirated windows 8 activation.

Go to Properties of My Computer and System info will say Windows is activated in both fake and genuine case. Click on View Details in Windows 8 activation to know more. 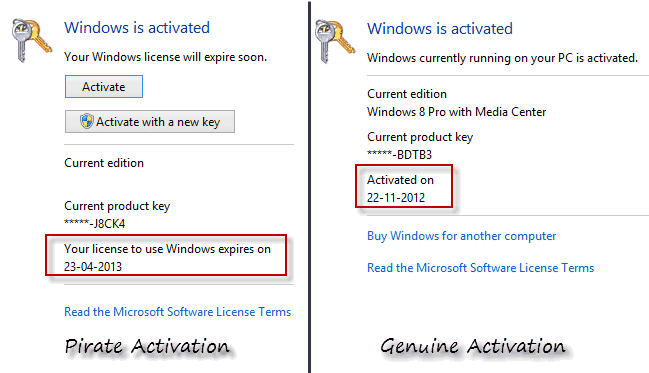 On other hand, Pirate Activation says just Windows is activated with no date and other things mentioned. It happens when you use a activator tool which just modifies system file to give output text as activated.

If you happen to activate Windows 8 using KMS trick, there will be one more detail in this window which tells Windows Expiration date. This is generally 180 days after the date of activation.

If you notice that Options on right namely Start Screen, Lock Screen and Account Picture are greyed out (disabled), it is pirate activation. 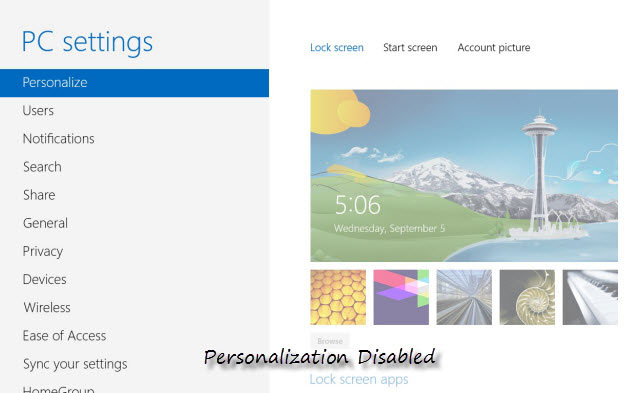 Most of the pirate activators just corrupts slmgr.vbs (file which is responsible for Windows 8 activation) such that it gives “Windows is activated” as output. But in actual, it is not.

Some of these tools also have feature to remove Windows 8 watermark and activation notification.

Why Windows 8 Activators are Given Free

Hackers have their own benefit behind this. They inject virus inside these activators while packing and then distribute it widely on free file sharing sites. You should be aware and avoid using such kind of things to prevent your system from malware infection. If you are trying it out of curiosity, make sure to carry out virus scan before using.

No. You will be able to use all the features and functionality of Windows 8 depending on the edition you have.

At this moment, there is no permanent activator tool on web which would make Windows 8 genuine like you did in Windows 7. The one you will download will fall in one of the above mentioned category. Instead of risking your system, I would say keep running Windows 8 unactivated if you want some more time to decide on purchase or rearm Windows 8 Trial to extend evaluation period.

Lastly, Pirates have nothing to lose, they found a loophole to crack Windows 8 Apps store too. So, today or tomorrow, there will be a working crack on Internet. Being such a popular OS, company cannot really stop enthusiasts and curious minds from such activities.

There are two ways,the first is to obtain a MAK key and use the official windows registration system via Skype to activate the system.The second is to use a local KMS server rather than the online MS server which will need repeating every 180 days.
All the other cracks so far produced just mess with system files and pretend the system is activated.

How I should know that I have purchased a genuine one or a pirated one. I downloaded the SW and installed it. I also purchased a DVD back up. How do I ensure the purchase is genuine. With windows 7 I got a hard copy of the bill. But here I got only two DVDs without any bill or a guide. Please help

First of all where did you purchase the OS and the backup DVDs? Did you

1. Install Windows 8 from the leaked ISOs and went forward with purchase from within the OS

2. You downloaded the Windows 8 Upgrade Assistant and used it to download and install the OS?

In both the cases, Microsoft would have dispatched an email to the address specified by you during the registration process. That email contains the bill as well as your Product Key. That itself is a valid proof of your purchase.

As far as the backup DVDs are concerned, you will receive a package containing both 32-bit and 64-bit versions of the OS. Your key will be valid for both the versions on ONE PC. You cannot install both versions simultaneously say on a PC and a laptop and use the same key.

For your reference, I am uploading the screenshot of the e-mail that I received as well as the photo of the DVD package. Please go through it and ask me if you find yourself in doubt.

Nice info. but i have one activator ….. it work like Genuine Windows 8 Activation………and it’s work perfectly ,with all features…… 🙂
link of proof: http://tinypic.com/r/jkdcsl/6

Maiyur, in this case check your Personalize tab in the PC Settings it will be dimmed out.

hi,
i read your whole article. i am still confused. as “maiyur” has posted a comment above, i also have the same activated pirated windows8 edition and same is displayed on my desktop, “windows currently running on your PC is activated. current edition-windows 8 pro…current product key- *****-%%%%%” (% is used in place of some text)
and my personalize tab is not blurred out. its also running smoothly. no issues regarding that. i can customize my lock screen, homescreen, and account settings without any issues.
so what’s your views regarding my situation?

I had installed win 8 frm a shop but all the fun. r working in persnlize menu execpt change photo.
Any suggestion?

Thanks for the info brother.

could you please tell me more about volume licensing and shareware and trialware windows os.