Road enthusiasts will surely like 18 wheels of Steel Extreme Trucker 2, a game in which you are a truck driver and get jobs to be completed on various paths of different parts of the world to make deliveries.

I like Racing and Driving games and love to have steering wheel in my hand. So, I tried to have hands on one such game this weekend which is not racing but you have to drive to complete jobs on time.

Local and the Peruvian Andes, the Canadian snow and Australian deserts add a special touch of beauty and challenge in this game. Then, without delay, prepare to face the road and all your setbacks to deliver loads as quickly as possible. 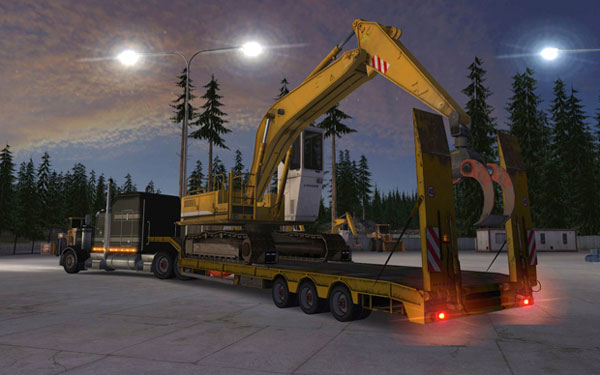 Each local map has four distinct phases, namely, to access one of them need to complete all the challenges before you leave for others. As this demo version allows only one hour, you may not get further than six deliveries.

At the end of a delivery, you earn points that serve as criteria to define your capacity in 18 Wheels Extreme Trucker 2. Each phase gives a certain number of points, and this amount is subtracted values according to the amount of damage you caused to the truck.

You must be attentive to other aspects of the truck, such as oil change and refueling. On longer trips will need to stop at a local gas supply to put more fuel to the tank, check oil level, etc.

Caution: When operating in dangerous places like the mountains of Peru, we must be attentive. Extreme Trucker 2 has no checkpoints and if you fail, you must start again from the beginning phase. So take care in the corners, because if you lose control of the truck and broken down fall, you must repeat all the work to complete the delivery.

In case, you never played previous versions of 18 Wheels of Steel Extreme Trucker 2, you will love it. 18 Wheels Extreme Trucker 2 calls enough attention for its visual beauty, as well as details of the truck, has beautiful scenery and make you feel real where deliveries are made.

If you like trucking, driving, and want just some more driving stuff, then game is for you. It will give more hours of driving while unlocking stuff, or you can always cheat and do random jobs in your favourite roads, or just use them ignoring the job.

Is the game worth it? Well, for its price, it is indeed. Just 19.95$ to unlock it without downloading any extra stuff. But anyway, as always, you should try the 1 hour demo from the site, just to make sure it works on your computer. Obviously 1 hour of playing won’t do much, but you’ll be able to unlock something and see how the game works.

I can’t play that game. I don’t think it’s because of technical programs at all. what should i do??