Facebook App For Windows 8: How Will FB Look Metro Style?

Australian graphic designer, Fred Nerby has decided to create a conceptual design of Facebook Windows 8 App. A systematic and ultimate social network app focused on tablets with a style reminiscent to that present in the entire ecosystem of Microsoft Windows 8 (Metro). So, it would not surprising that a future application of Facebook for Windows 8 would be somewhat like this.

Fred says that he wanted to create a design that would improve the understanding and relationship between the user and the content. “Today, where the visual impact is crucial, the design of Facebook is not really showing essential information that people want to see in a way they want to see.” 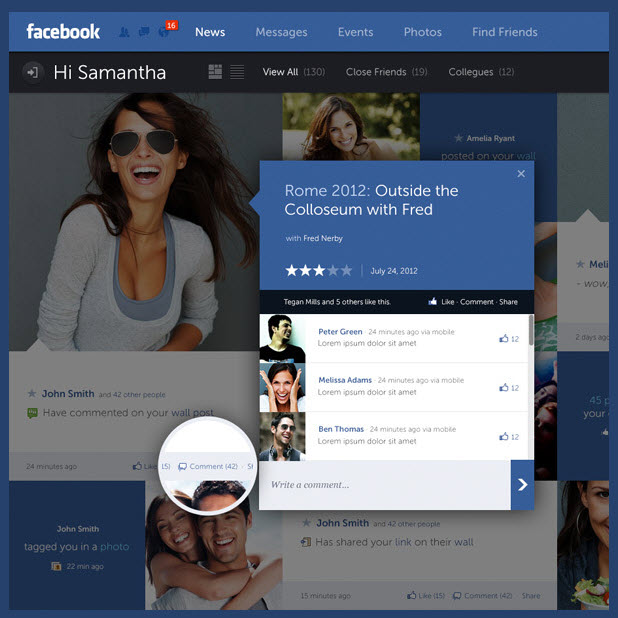 The designer approached the platform from a user perspective and focused on specific and custom data while maintaining a visually appealing interface. Facebook has done a good job in this, for a long time, but we’re still not seeing the magnitude of what is possible within this powerful platform.

Fred believes that the design and development of social networking is based on the personal information on user profile. And that’s true because we are inundated with banners, advertisements including their digital signage, and other media based campaigns that disrupt user mindset.

At the moment, there are no known company plans to create its official application for Windows 8. Even though one of its major rivals in the world of social networking, Twitter has officially announced that it is developing its own application for the new system. There are was one app developed by Pearls Apps called “Facebook” in Windows 8 App store but looks like it is also removed now.

In Late 2012, conducted a Facebook and Windows 8 hackathon at their office. So, chances are that Microsoft is internally dealing with the social network, so that consumers can finally have an official Facebook application in Windows 8.

I just wish that Facebook should get inspired by this beautiful conceptual design while building an app for Windows 8 app Platform. I so loved it. Do you?

he designed it basically for the web and it is clearly mentioned that it’s a responsive design for web not for windows 8 apps.
get the facts right b4 u write abt it…

Hi Dhruv,
I agree that Designer didn’t mention about specifically about Windows 8. But, let me tell you that Fred Nerby is a Graphic Designer and the designs made by him could be adopted for designing app for any platform and not ONLY for Web UI.
The way he designed User Interface (Grid Like) are very much similar to Metro UI of Windows 8 which I mentioned in the beginning of article.
So, I just wished that this could be taken into consideration by Facebook developers while designing an app for Windows 8.
I hope that clears up the air.