Organize Facebook Friends in Circles similar to Google Plus

One of the most striking things about Google Plus social network is the ability to organize our friends in circles, the equivalent of Facebook friends lists. It’s really easy to  just drag and drop a set of contacts to a blue circle to put them in a list, right? So, here we will see how can be imitate something similar to organize Facebook Friends.

Ofcourse, Facebook isn’t providing this feature itself but an experimental project using Javascript and Facebook API by a third party developer. Circle Hack is a name of application which lets you organize friends in circle, drag and drop them in new circles and create new circle. 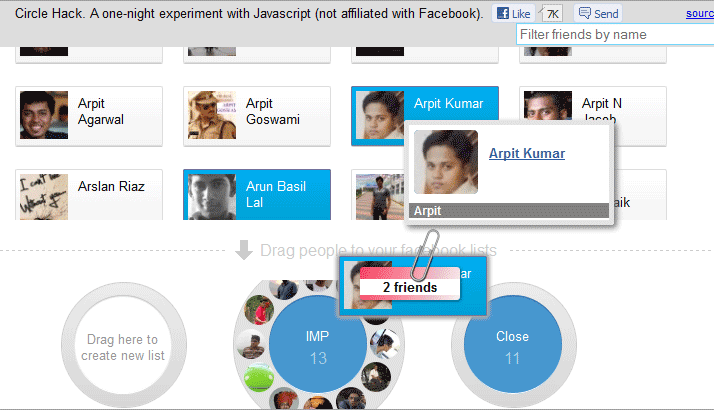 For every circle you create, there will be a new Friend list on Facebook and existing Friend list will be updated if you drag-and-drop profiles in existing circles. This worked for me perfectly on Firefox 4 while there were problems on Chrome 12 and somewhat less animated UI when tried on IE9.

To start using Circle Hack go to http://www.circlehack.com/ and login with Facebook. If already logged in, give access to application to fetch your friends and friend list. In a moment, you will be presented with Friends profile and Circles similar to Google Plus.

Once again, this is just an experimental application and not in anyway prove superiority of any of social network. If you like Facebook Interface then there is a way to give Facebook makeover to Google+.

Nice would love to try it.I think its buggy, it does not log me in with facebook.

As I already mentioned that it has browser compatibility issues. For me it worked fine on Firefox 5.

i want to use google plus because it kept secrecy

I’ve also tried the open source app at http://dtinth.github.com/friendlist/, and it has the same problem, but comes up with a different set of numbers again.

It would be great if there were some way to organise friends on facebook, which was accurate and consistent with what facebook says!