How To Fix Adsense Alert: You Have Rejected Ad Requests

Whenever a webpage loads, Adsense code on a page request for relevant ads to be displayed. When the request is sent with incorrect information, it gets rejected and blank space is shown instead of Ads. This occurs when the URL of the server from which the ad unit has been served differs from the URL of the actual page where the ad will be displayed.

To make it easier, Google is saying that: If the ad request is sent from abc.com, it should be displayed on abc.com itself and not on xyz.com. Requesting Server URL and display Page URL should be same.

You have rejected ad requests, which will result in lost revenue 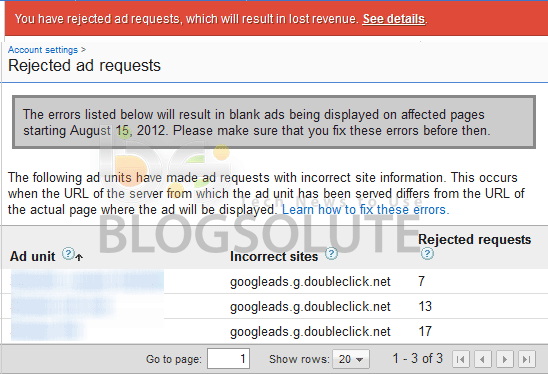 Now, you may argue that it is same and ads are running fine on my websites fine for years. But this looks like a recent update in Adsense resulting into error alert in many Adsense account holders.

Solution to this problem is silly and mentioned on Google Support Page.

You need to specify the Requesting URL which is same as Display URL in Ad code itself.

Add one more variable to existing Ad code called google_page_url specifying your domain name. That’s it. Make sure your replace your site name in the URL in red color.

When solution is already mentioned on Google Support, I wonder why so many webmasters are psyched and ranting over this issue on various forums.

[alert-note] I have made this changes on all Ad units displayed on site. There is no button or way to tell Google that you have made the fix. I hope that alert will be gone once Adsense determines that changes have been made. I will update this article on any confirmation. [/alert-note]