Fix The Problems After Virus Removal on Windows Computer

Antivirus software will remove the virus or even delete the infected file but what about the damages being made? Once system is infected, Virus corrupts many system files and it may result in instability or inaccessible locations. For example: You may not be able to Hide Folders or access Task Manager.

Antivirus disinfects system by deleting an important system file if it fails to remove malicious code from a file. In one way, this is good but only one task is accomplished in this procedure. System is now virus-free but Windows will not act normal in most of the cases.

Here’s how to repair Damages and fix problems after removing Virus using a small tool called Windows MediaKit. It helps you gain control over Windows OS, delete viruses and fix Windows registry after a virus attack or infection.

Windows MediaKit is a collection of tools in a small portable package which can help you repair and undo the damages. It contains several common fixes for the damages made by virus which can be found under WinMediakit menu. It includes: 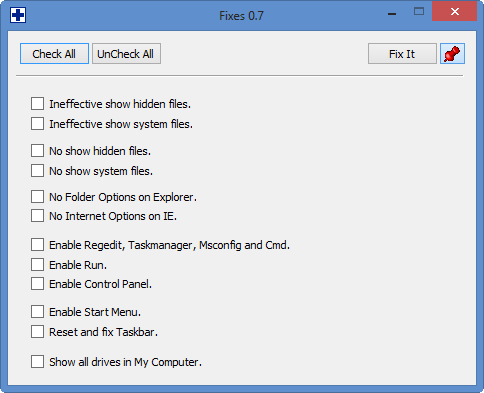 There is another common problem of File association after virus removal which cannot be fixed using this tool. In this problem, you won’t be able to open certain file or a program. Learn why File or Application isn’t opening on Windows or use File Association Fixer to solve the issue.

Safe Explorer– Apart from Fixes, there are some other modules of this MediaKit. Like it includes SafeExplorer which is nothing more than a simple Windows explorer. Along with that, you can set Windows to delete particular files on your next reboot, or reset NTFS permissions to give you access to certain files and folders.

There is another feature called Drives Dog and Files Dog which I tried but couldn’t understand its use. When I tried Files Dog, it simply deleted the file and nothing else. I couldn’t even recover it back.

Download – Windows Mediakit. Note that Bitdefender Website Scanner may warn you about website being infectious but I have tried and tested the tool on my system protected by Bitdefender Antivirus itself. It is completely clean and virus-free.

Good and useful article (but don’t know how useful is the software, I have to check it yet!). But, it would be better if mentioned, in above check boxes what are to be checked and unchecked, to make the OS to its default status. Or they could make a single/simple option for it to Rest Windows to Default Settings ….or like that.

Anyway, thanks for this article, because many of these problems I also faced after removal of viruses.

No, it isn’t like that. You should check only the problems you are facing.
For example: If your task manager isn’t accessible and you are unable to view/hide folders. Then check on only those two options.
Tool has fixes for most common problems faced after virus attack to bring back Windows to default.

If we ignore the antivirus alerts then only we can download and play the pirated games..
Once the system is damaged badly then full format it and re-install with new OS.
Thanks for the post.

Srinu, Ignoring Antivirus alerts to crack apps is completely different issue. In that case, you are deliberately risking your computer.. but for a reason 🙂

But we must be care while doing online shopping and doing banking works on internet..