Security company G Data has released new versions of its 2012 security software. Backed by a scan engine that has achieved the best results in demanding evidence of AV Comparatives, the solution of G Data comes more optimized and full of interesting news.

G Data TotalCare 2012 is a security suite that goes beyond the classic concept of antivirus, offering powerful tools for active and passive protection in a simple and friendly, accessible to any user profile. In TotalCare version, G Data offers such interesting features as a parental control module, a powerful tool to perform automatic backups (much improved in this edition 2012) or specific protection systems when we use the browser in online banking or shopping . 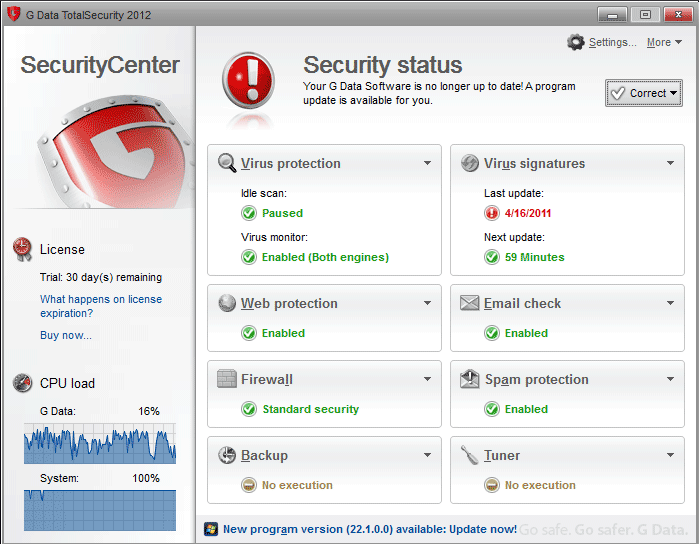 The new version of G Data TotalCare 2012 presents some interesting changes in the interface on which we tested last year. Now all options are available in the main panel and you can access them with a very intuitive drop-down lists. Again, it uses a color code (red, green, yellow) to warn the user of the device and, in case of problems, identify the steps needed to solve it in perfect Castillo (at this point deserves translation work be highlighted).

The basis of this security solution remains: a dual virus detection engine (the latest revisions of Avast and BitDefender) with regular updates with OutbreakShield, the system real-time protection, G Data TotalCare make 2012 one of the most effective security products on the market. As usual, we conducted several tests with the suite of G Data obtained a detection rate of 100%, even forcing adware infection with latest web and email. 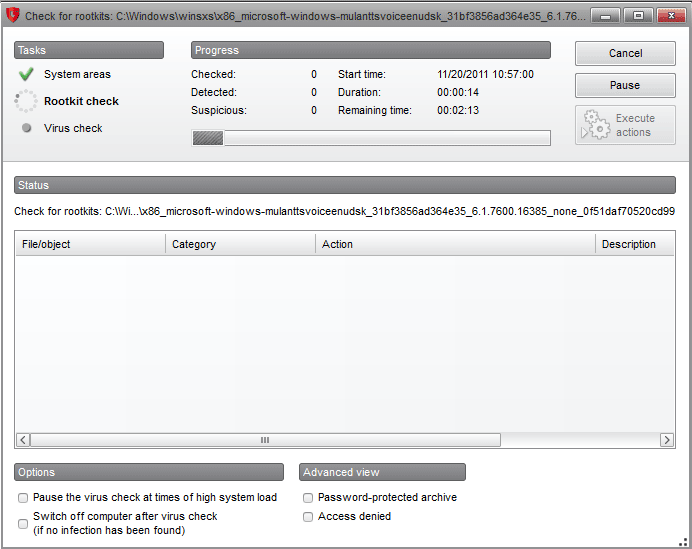 Furthermore, the rate of false positives is minimal now (only detected a strange file name as a potential threat) and at any time ask the user what to do before acting to avoid software conflicts with certain applications. In any case, the program always leaves it to the user who makes the final decision if it finds any suspicious file.

The best solution is G Data components such as firewall, spam detector or the Web module that work in sync with the dual antivirus engine, offering comprehensive protection and avoiding phishing attempts sophisticated applications that install adware without the consent of user or problems caused by P2P applications, to name a few examples of threats that go beyond the classic virus infection.

Resource consumption is a decisive factor fewer if we consider the power and the large amount of memory that incorporate today’s computers. The demand for G Data TotalCare 2012 on hold does not reach 5% of the resources of a standard computer (Dell Studio, dual-core processor, 2 GB of RAM) and only when we make a complete scan, we see a decline in multitasking scenarios especially if the equipment does not exceed the gigabyte of memory. In any case, it is advisable to schedule scans when we are not using the computer to accelerate and facilitate the work the software.

Among the extra features worth noting the efforts made ??in the backup utility, fully renovated and with the possibility of a backup to restore the entire system in case of problems. Another improvement is the anti-spam filter, which now includes a module specifically designed for Microsoft Outlook, one of the email clients most popular in professional environments.

Another addition that does not usually come in this type of program is the automatic optimization of the system . Clearing caches, history cleaning, and a review of system settings that may affect safety. This automatically checked with the press of a button, and can also be programmed to automatically

I have a few days testing G Data Total Care and the truth is that I’m happy with it . It is not too intrusive, is effective and has not given me any problems. I have not seen a worse performance of the computer since I installed it, and that you have all options enabled. 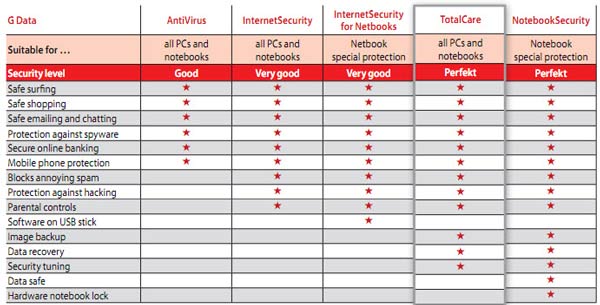 What I liked were some small details, because in the end after all the security programs protect us well. For example, G Data uses when your computer is idle to analyze the system further for malware. I also liked the fact that it can be disabled until reboot the PC or for a period of time antivirus and firewall with just three clicks from the system tray.

I think G Data is a good security suite: works well, is effective and does not disturb the user.

Note: G Data Total Security 2012 and G Data Total Care both are similar things just the name varies according to Country which may be due to Trademark issue.