Opera Mini is quite a popular application and used by almost all of us on Mobile devices for web browsing because it offers fast browsing even on slow GPRS connection. Problem comes when you are connected to Internet via GPRS on Computer / Laptop and you are stuck with slow loading webpages.

At the time of writing this article, I am at a rural place, far from my home without any fast 3G connection. Only option left with me is Airtel GPRS connected to Laptop and I was experimenting things to get things done somewhat faster.

Here are some results and my experiences with different web browsers at slow speed.

Though there is no program called for Opera Mini for Windows or any Desktop but Opera (Desktop version) has an awesome feature called Turbo which does similar job.

Opera Turbo offers faster web page loading and speedier browsing even on slow GPRS / EDGE connection. Obvious question is how does Opera Turbo mode does that and how can it squeeze out speed. So, let me tell you how.

Unlike regular web browsers, Opera Turbo doesn’t serve downloaded page elements (images, text, scripts, etc) from server. Whenever you request to open any web page, it first loads on Opera servers and compressed there before they actually load on your computer. 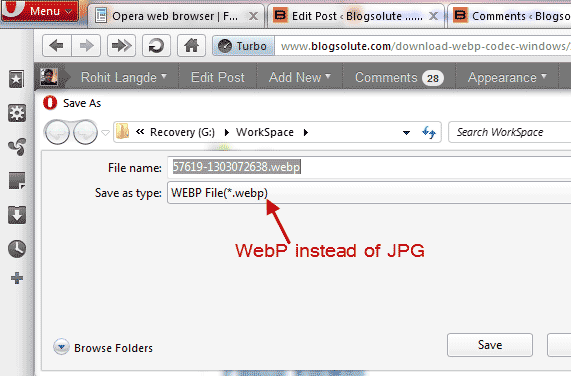 As the data loaded by you and using machine is compressed one and light in weight, you save bandwidth. This is useful when you are traveling and using Wi-Fi which is charged according to use.

Till version 3.6, Firefox never worked well on slow connections but Firefox 4 really does a good job even on GPRS connection comparing to its predecessor.

I will limit myself from giving out timings in seconds but even Google Chrome couldn’t outperform Opera Turbo Mode.

For browsing, I can conclude that Opera is a clear winner and you can call Opera Turbo as Opera Mini for Windows Computer.

When  Downloading, I used Internet Downloaded Manager to squeeze out maximum possible speed from storage server. Maximum speed I received was 27.32 Kbps with an average speed of 22 kbps when tried on multiple sites.