Pinning Application icons to Windows 7 taskbar is a cool thing as it allows fast access to most used Programs. Bins is a program to group Pinned items on Windows 7 taskbar. Simply, Merge multiple icons into one and create a group.

I am big fan of Fences which lets you organize Desktop icons in better manner and Bins comes from the same creator. As you can see in the screenshot, you can arrange similar type of application icons into one group. For example: Microsoft Office applications i.e. Word, Excel, PowerPoint can be grouped into one.

Bins can show upto four icons into one group. You can accumulate more than four icons into one but number of icons displayed will be four. The settings offered by the program, accessible under the settings icon located in the system tray, allowing you to enable or disable various additional features related to Peek and other extra items. 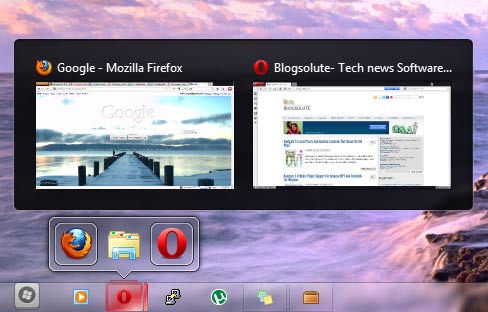 To Create a group, Drag an icon over other. To remove an item from Group, drag back those icons to taskbar. After installation, it will ask you for system restart but you can restart just Explorer process to start Bins.

In my case, 4 icons didn’t show up may be because of small height of taskbar and Third Party Theme.

Although, The program is in private beta and requires invitation to download but who likes to wait? I share the direct link to download from my dropbox.

Thanks for the direct link. I had read about this program in other sites and really wanted to try it.

I wasn’t able to use the jumplists after installing this software, but it is good, makes good use of the broad taskbar of Win 7