Have Your Own Television Program with Make.tv

Make.tv is a new platform that offers an online software in which you can mix audio and video in several ways, creating effects and synchronizing the various tracks of an extremely professional manner.

All programs created (classified by episodes) can be viewed by other readers, reporting to work your clever and sinister. Here I have shown the appearance of the control panel, where you can capture video with the webcam at the top, add resources and the audio recording of your precious voice by microphone. 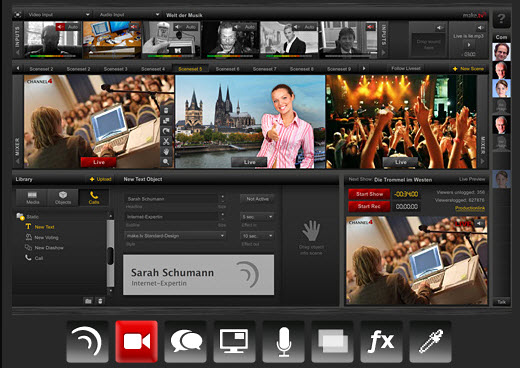 As seen in the capture of our performance table , we have to create up to ten scenarios, each with up to three sources to which we will be adding to each a series of objects , including images taken in real time our webcams, it also allows us to modify some parameters.

Further down at our table we see a series of controls that allow us to manage our objects, but also have an audio mixer, allowing us to build our library of audio tracks along with three mic inputs , which give way or mutearemos as we wish. In addition, c ontamos with a communications system, called intercom , which is the name actually used in television system, where the director calls the shots in the programs.

And if we have an intercom system, obviously we have to be the recipients of our messages. And so, as we create TV programs by adding new users collaboratively to each of our episodes , which is what we call each of our programs.

And as we said earlier, visitors gain access to our private player through a url, which will allow you to see our program even full screen .

I miss a visual effects between sources, since the passage of images makes the cut, and a certification system for our performance table is complete.