Microsoft offers two licensing options for MS Office to suit public needs namely Retail and Volume. Finding out if your Office license is of type “company” (“volume”) or bought in shops (retail) is not straightforward as one would expect. So, here is a small script which can reveal License Type in Command Prompt.

The first, called “Retail”, is that for the general public. All copies of Office purchased from a retail outlet in the neat package shelf are of this type, as well as those that were pre-installed on certain new PCs. ISO images also downloaded via MSDN and TechNet subscriptions should be exclusively of this type.

The second way is instead called “Volume”, and is available to those who need to buy more than 5 licenses for its fleet. Only editions of “Standard” and “Professional Plus” can be purchased in this way, and those interested should apply directly to Microsoft for the purchase.

Difference between Volume and Retail License

The differences that exist between the two are numerous, and not only about the legal aspects related to the license mode.

If the point of view of aesthetics and functionality to the user are not obvious, like product activation features work quite differently: in particular, copies of “Volume” should rely to a Key Management Server (KMS) local for this procedure. This freedom eliminates the need to contact the central server by Microsoft to attend to the operation, but requires that the system draws up the server properly.

Another disadvantage is the fact that, in contrast to the inflections Retail Volume copies of Office are not enabled permanently but they should contact the KMS again every 180 days to remain operational.

On both types it is possible to bypass activation or postpone if you Rearm Office 2010 which is legal method.

If you purchased the software or the store you got through TechNet or MSDN, you can stop reading here: installed on your system is definitely a “Retail” version.

If you seek further confirmation prompt, open a mean any application of the suite and bring in File -> Help. Now look at the words shown at right, under the colorful logo of Microsoft Office: if you read the following, your copy is definitely Retail:

Notice that the opposite is true: if, for example, here the word Microsoft Office Professional Plus 2010 or Microsoft Office Standard 2010, you could have both a retail version (obtained via TechNet / MSDN, because the two editions are not sold in shop), or a volume.

For rest of you, Run a  Command in Command Prompt (Run as Administrator), one of the following script: 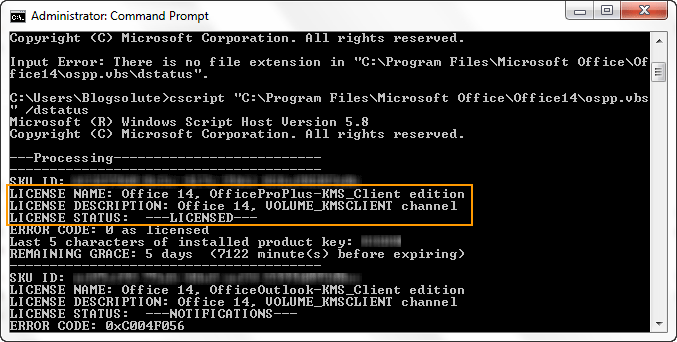 In Official way, it is not possible to switch from one License type to another but yes, there are some forums on web which can help you to do it. Procedure is to replace some files in installation folder of MS Office with the downloaded ones in the archive.

this is working with msoffice 10