How to Install Latest Nvidia Driver on Linux Mint 13 (Maya)

Installing the Graphics Card driver is the first thing that you will like to do just after installing Linux.  Though nowadays you are provided with general drivers to meet your needs, you will find many features and desktop enhancements missing.

Now here we will be going through a brief guide to install Nvidia Driver manually on Linux Mint 13. This is the simplest non conventional guide I could figure out and will help specially first timers to Linux Mint. Why non conventional? Because I will be skipping Some steps from the traditional Method. You can say taking advantage of improved Linux.

[alert-announce] The tips below can be used with any Linux, Just the commands will change. With the guide you can install nvidia driver with just 2 commands. [/alert-announce]

On the next screen you will be provided with the latest available driver, Download it. If you have 32 bit OS change Operating System to Linux 32-bit.

Once it is downloaded, open the download folder and copy the file in home directory. The file name will be NVIDIA-Linux-x86_64-304.43.run. Remember 304.43 is the version, it will change as new versions are released.

So, you have copied the file to home directory. Now rename it to 1.run. Nothing specific just write any small name for convenience.

Q) Why did I move and renamed the file?

A) Well, it’s really not necessary. By doing the above step I reduced 1 command to go to location of file and also saved myself from typing a big name while installing.

You are now ready with every thing you needed before installing the Nvidia Driver.

By default you have the Noveau Driver installed in Mint/ Ubuntu and also in others that I have not tried yet. So to install the Nvidia driver  this Noveau driver has to be stopped first. There are commands to manually stop this driver but I personally never used them. As my target is to reduce commands as much as possible, I will be using a so called 2 phase method.

Q) What the heck is this 2phase method?

A) There is nothing called as a 2 phase method officially in installing the driver. It’s basically using the setup twice.

Xserver is stopped. Now to remove Noveau Driver (we are starting the 2 phase method)

(1 is the renamed file, it will be anything you renamed the file to be)

Nvidia driver will detect the Noveau driver and create a file to stop it in next run. At last it will fail to install. Just use

to reboot your computer. After reboot, again go to text only mode ALT+CTRL+F1. Stop the xserver and

Go through the instructions and you are done. Reboot system by command. 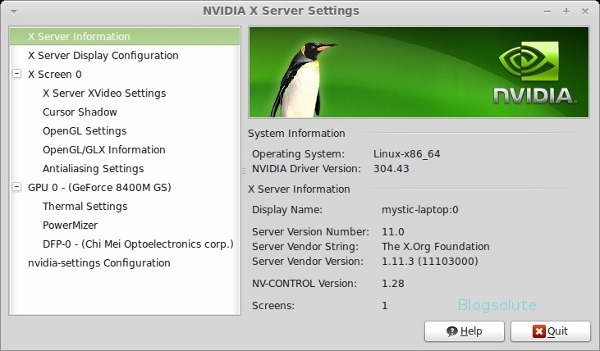 To access the Nvidia X Server settings, go to menu and search for Nvidia. The application will appear in search list.

[alert-success] TIP: Paste the required commands in your terminal once and execute. Then in text mode you will not even be required to type them. Just use arrow keys to bring up past commands. Anyways its just 2 commands and really easy ones.[/alert-success]
Click Here to Leave a Comment Below 5 comments

okay so I went through this pain to deactivate nouveau and install the //latest// nvidia driver to find it only supports low res ….640x
perhaps someone should have warned us about this. now I am completely up the creek.
my only choiceIis to go back to lisa. as ? dont have the skills to keep fighting the windows authoritarian style of maya which denied me the option to install the linux driver in the first place. Instead I was stuck with the POS nouveau driver which had no support for polygon mapping in google earth.
which is why I started this whole sorry episode.

this tip worked great for me on linux mint 14.
many thanks 🙂

I just installed Linux for my first time. And this solved my “cinnamon crashed” reload? problem with Linux Mint 16 and Cinnamon.

Yay! Worked for me – having another go with Linux Mint now that Windows XP support is about to end 🙂

Driver is used now, but menu background is fully transparent, as good as unreadable, and working is impossible due to extremely lagging. Responses to any action is dealayed by about 20 seconds.