iPad Launcher for Windows 7 is a program capable of creating up to 54 shortcuts on a single screen. What is most striking in this application is the design applied to the interface which resembles Apple iPad / iOS. It also comes with an elegant lock screen feature with single button like Apple iDevices.

Using iPad Launcher for Windows 7 in your routine in the computer can gain greater productivity, as all applications are very close. You can customize the shortcut icon for each, enabling the appearance of the accompanying software you like.

It facilitates the execution of programs installed on your computer and leave it more attractive and modern. With this initiator, Windows 7 will have the appearance of the iPad. 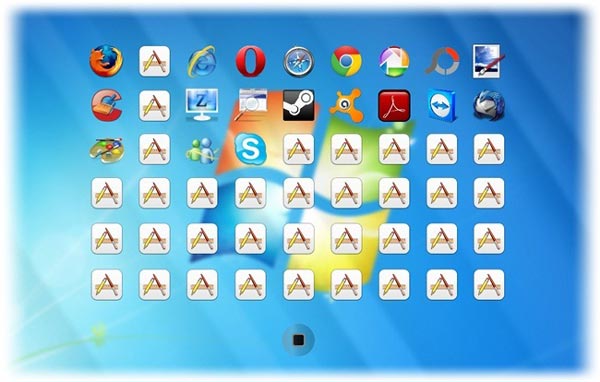 How to create shortcuts

The operation of the iPad Launcher for Windows 7 is easy. After running it, just click on the icon relating to the desired program to open. The process of creating shortcuts gives a bit of work.

The first step is to position the cursor on the position you want to add the shortcut. After a few seconds, it displays a small window called “Settings”.

The only restriction is that the images are in PNG format, due to the transparency applied to the bottom of the iPad Launcher for Windows 7.

Then click the second button with three dots and open the executable program file you want. This will allow, pressing the icon, the bound application is executed. To finish the procedure, click “Save”.

iPad Launcher for Windows 7 offers another feature: the screen lock. Press the middle button and set the password to unlock the screen. Next time, you press that button, full screen gets covered with black and you need to enter password to uncover.

The operation of this application is easy. The procedure for creating shortcuts gives a little work and requires patience and time. On the one hand, this can be taken as a negative point of the program. The creation method adopted by the program allows customization of icons, this being a positive feature.

If you are looking for a way to make your desktop is more modern and promote the performance of your computer, this application may be an interesting tool and can be downloaded from here.

Looks so boring, not so good ui

Dude, this: iPhone style Launcher for Windows 7. this luxury.
Definitively, what should I test on my Windows 7.