Load Firefox Tabs one by one progressively to speed up loading

Firefox web browser by default restores the open tab after the restart. Many of us have tendency to open more than 8-10 tabs and after a restart, all tabs try to load simultaneously which takes more time. No single tab is able to load completely in such case because of bandwidth constraints and so, it will be better to load tabs one after another after successful loading. 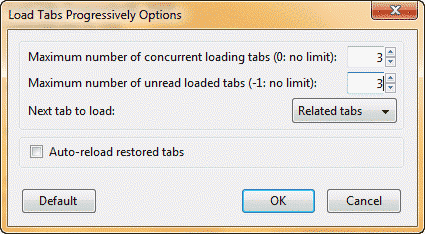 Out of multiple tabs, we have some priority tabs with priority which we want to be loaded earlier than others so, Load Tabs Progressively is a helpful addon which can do that. It can restrict number of tabs loading at a single instant. It is possible to limit number of concurrent loading tabs. After the successful loading completion of these tabs, another group of tabs loads.

Also, If you want some different tab to load early or has more priority the, it is possible to select and load it at same instance. It is not only for those, who have slow internet connections but for everyone because several tabs loading simultaneously will take more time than loading them progressively.

Interesting article, will definitely be useful for Firefox users.

But I use an add-on called BarTab. After the restart, it will load only the tab that we are viewing. So we can just click on another tab to start loading it.

Hey Ashwin, Bar Tab too did the same job. After looking at their Description page, it seems both are new in extensions gallery.

Its Very useful to me and other people with slow or dial-up connections.Thanks for sharing.