Looking at the Memory requirements of MS Office 2013, I was surprised and thought “wow! 1 GB of Memory just to write a document”. And this is the minimum requirement or recommended amount. To many of you, it may seem enormous but a truth.

But after giving some thought over it, I noticed that Computer users are now used to such Memory usages. For most of us, it isn’t a problem anymore, right? We just install and run the software and hardly care about the lack of RAM and memory requirements.

Do People still Worry about Lack of RAM?

I decided to investigate if people still keep complaining about the lack of memory on their computers. With the help of Google Insights, a tool that shows the popularity of any search, I got this nice graphic:

The chart above indicates the number of Searches for the search term “insufficient memory“. The data ranging from 2004 to Today shows an unstoppable decline. It means people are no more searching for that term which signifies they no longer have memory issues on their Computer.

Here is another graphic stats for the keyword “not enough memory” which also tells same story.

Memory management on Windows has been drastically improved since then. Also, the prices of RAM Memory saw the downward trend. Here is a graph which shows Memory prices going down with time from 1955 to 2012. 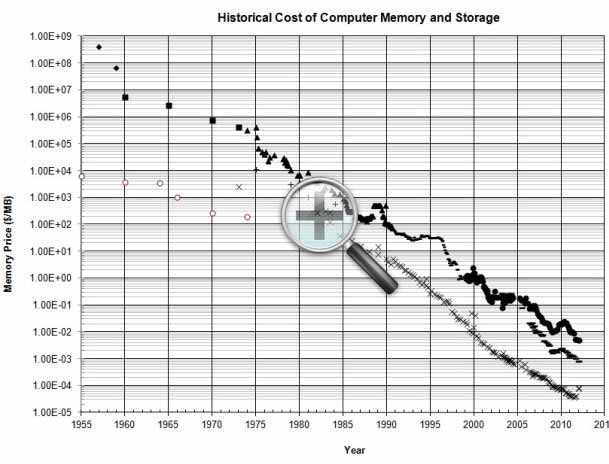 Except for a few blips, the slope is constant. The memory is becoming more economical and computers include more and more. According to the Steam survey, 31% of PCs have more than 5GB of RAM, and 76% of PC has 3 gigs of memory or more.

What more- 64 Bit versions of Windows now supports 8GB of RAM breaking all the barriers.

From the available evidence, it indicates that the memory consumption of software is no longer a problem for most people in their daily lives, although programs such as Chrome or Firefox consume hundreds of megabytes.

True, there are scenarios in which the amount of memory still has a critical role : workstations for video editing or scientific computing, servers, and so on. But at home, the problems seem to be over.

So, let us know if you still face memory consumption issues on your Computer? If yes, How do you manage to solve it?

Rohit Langde
i used office 13. but its doesn’t work with Sinhala language. so i removed.

From my opinion whenever we will have nice things to use like that then one thing is sure we will need to face some kind of problems in that also but if we will take and understand better then we can solve it also in less time.