Windows 8 is officially not released yet but its Metro UI is already popular. We have already covered  Windows 8 Metro IM Theme, Bring Live tiles on Windows 7, Aura, Taskbar UserTile to get glimpse of Windows 8 interface on Windows 7.

If you are on Windows XP/ 2003 you can also tryout Windows 8 transformation pack for Windows Xp/ 2003.

Still if you are not satisfied and want to try more application then Mosiac Windows 8 Edition is here. 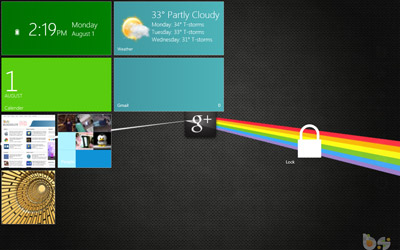 Mosiac Windows 8 Edition is a Windows 7 portable freeware application. It is easy to use and after downloading you have to click on the” Mosaic.exe” to run the application. Just after the application is launched, you will get a clock widget on your desktop.

To play more with this application, take your mouse cursor to right most side of the screen and click. Mosiac sidebar will appear and you can see various options to add more widgets, pin webpages, pin applications etc.

You can add more widgets to your desktop which include calendar, weather, Twitter, Gmail, Control panel, pictures, user account, lock screen, Facebook friends etc. The twitter widget did not work with me as the application crashed several times when I tried to add my account to it. Other widgets work fine. 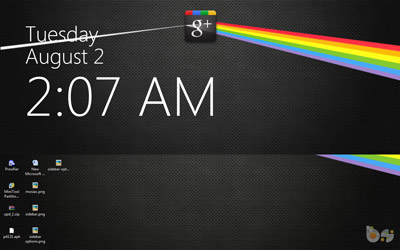 The lock screen widget toggles the screen lock. To unlock the screen you have to lift the locked desktop upwards. To do this just right click and hold the mouse button and drag the screen upwards. 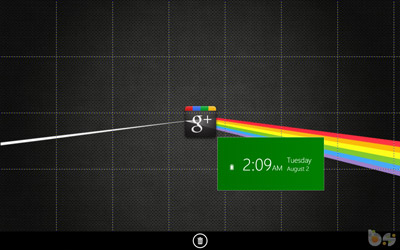 Mosiac Windows 8 Edition also allows you to place widgets on desktop according to your choice. Just drag the widgets across the desktop grids to desired position. To remove a widget you can drag it to remove icon that appears at bottom of the screen.

This application is customizable. You can go to options and toggle full screen mode and also change its default color. Over all it is a nice application but not bug free. It crashes several times while performing many tasks.