Microsoft is offering free trial version of Office 2013 products which has a evaluation period of 60 days. But, it isn’t clear what exactly will stop working after this period. Will PowerPoint and Word will refuse to open and view files or just restrict me from editing documents?

I installed Office 2013 Trial RTM Final version on 20th November (It is different from Preview version). So, just yesterday, software completed 60 days of residing on my Windows 8 Laptop.

But, in reality, I was able to edit documents and even save them. No Problem at all in other products too like PowerPoint or Excel.

Next day, when I tried opening a document again, Office 2013 welcomes me with Activation wizard. It reads “If you choose not to activate this time, you may run the software for 30 more days before it becomes unlicensed.” 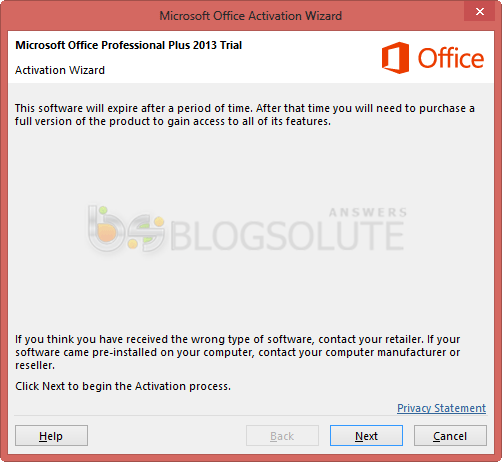 Still wondering, from where these extra 30 days came magically when it was supposed to stop working.

I remember how Office 15 Preview continued to work without any problems after showing similar notice on first run. Maybe, after 30 days, Office 2013 RTM will also continue working without activation or maybe not.. Let’s wait for 1 month more and I will update the article.

Just for experimenting, I tried activating MS Office 2013 over Internet, it throws an error (code: 0xC004C032) saying something went wrong.

And when I try clicking on Buy button, it opens Microsoft Office 2013 Preview product information page.

If you are trying to trick Microsoft activation process using any KMS activator or so, then let me tell you that it doesn’t work on Trial version downloaded from Microsoft Technet.

Update 19 Feb 2013: Microsoft Office has finally stopped working. Not that it doesn’t open but editing document functionality has been disabled. You can still open any file in read mode only.

On the last day, MS Word 2013 greeted me saying: The Trial of Microsoft Office Professional Plus 2013 is expired. Editing in Word has been disabled.

Still, I was able to edit documents but next day it finally stopped and asked to enter Key or activate using Signing in account. 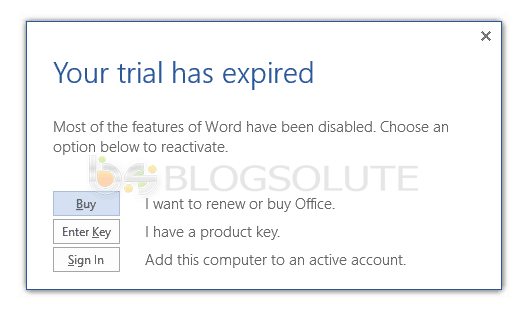 Looks like, I don’t have any option apart from buying the license.

Update: Office 2013 may release on 29th January according to a rumor. Maybe that’s a reason that link isn’t working and they gave me extension of 30 days.

I had similar problem.