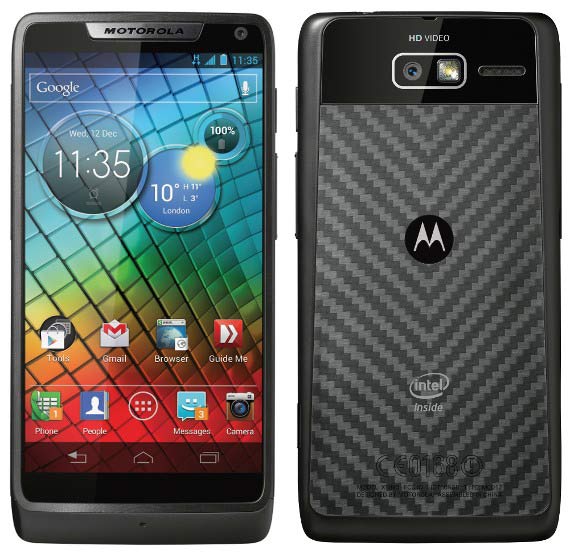 Dual core smartphones up to 1.5 GHz were seen but Motorola went one step ahead and brought up a 2 GHz smartphone called Moto RAZRi powered by Intel Atom Processor. Yes, the same Intel Atom processor used to power Netbooks.

Motorola Razr i is a full screen (edge to edge) smartphone with a display of 4.3 inches running on Android 4.0.4 ICS. The RAZR i boasts 8MP camera which offers up to 10 shots a second, NFC capabilities and Android Beam.

The above features might not be interesting as all of them are now a standard in high end smartphones however, two things which grabs anyone’s attention are: Intel and their 2 GHz Atom chip inside.

It isn’t the first smartphone powered by Intel processor but a first with reputable manufacturing brand.

It is powered by a 2000mAh battery, claiming up to 20 hours of mixed usage time. Speaking of design, the smartphone has an aluminium frame and a Kevlar back panel. Motorola has made its own software additions including SMARTACTIONS which will trigger specific apps and the interactive Circles Widget that allows quick access to notifications, weather, time and more.

Device could decide fate of both companies; I mean Motorola (recently taken over by Google) and Intel (dying to enter in Mobile market).

Price of Motorola Razr i isn’t officially unveiled yet but we will soon come to know as its launch is scheduled in October in the UK, France, Germany, Brazil, Argentina, and Mexico.

Is it Powerful than Most of the Computers / Laptops today?

As quoted on Expert Reviews– RAZRi only has a single-core, though this is balanced somewhat by Intel’s long-established Hyper Threading technology, which effectively creates two virtual cores on one physical processor.

Here are a quadrant score results:

No, it is not the most powerful phone out there but they didn’t detect any slowdown in the installed Android 4.04. Navigating the menus and even switching between applications were quick. In fact it felt snappier than its immediate competition.

So, what do you think about this move by Motorola? Will you buy if the price is in the range of other dual core phones?