Nirbhaya and Fight Back: Android Apps to Protect Women Against Crime

Recent Rape case in Delhi has raised many eye brows and Women’s safety in country is in question. Technology can be your friend to tackle such situations like attempt to molestation and protect women against Crime. Here are two apps designed and configured specially for women to protect themselves.

These emergency tackling Android apps for women alert phone contacts in one click via SMS. Text includes your name, kind of emergency and GPS location.

Nirbhaya means Fearless. App’s name is a tribute to the girl who was a victim of recent Rape case in Delhi, India. This app is built to tackle emergency situations by notifying closed ones (Family or Friend) just by hitting one Panic button.

App lets you customize Contact Groups for various kinds of emergencies like Accident, Molestation, etc. You can feed the emergency numbers like Police Station, Ambulance, Office Supervisor number (in case you are working) and any custom contact from Phonebook. 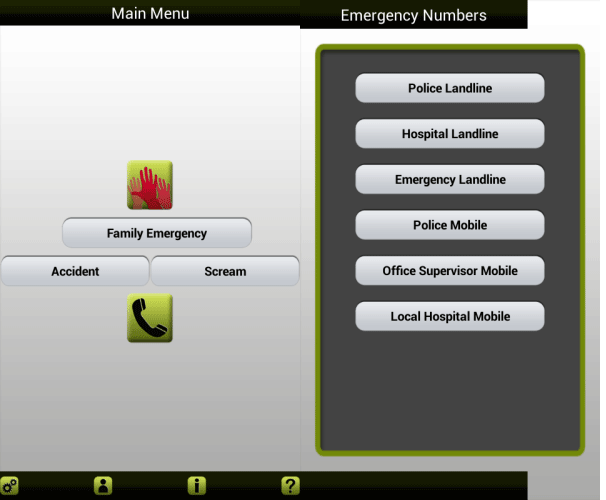 In case of Danger, you just click one Panic button and your family, friends and Police will be alerted about it along with your GPS location via SMS.

Along with text message notification, it also supports Facebook and Email integration. It means, emergency message can also be posted on your wall instantly during emergency.

Fight Back is another sophisticated app to tackle emergency situations specially designed for women’s safety. It uses GPS, SMS, location maps, GPRS ,email and your Facebook account to inform your loved ones in case you are in danger.

To use this app, you have to register account on Fight Back portal and provide your phone number and device name to get download link. After that, specify phone numbers and email IDs to alert during emergency.

Working is similar to the Nirbhaya app but in addition, Fight Back has web interface too. On web, you get to see number of alerts sent and track location using the Google Map.

Though advertised and said to be designed for women, Apps can be used by men too for their protection.

quite good but how many people use Android….. and how many of them are aware of this app….. those who using at least they can relax a bit that I can inform someone in danger…. the app should be promote vastly to get some output from it….

Android has taken place in low price range too so, it has a major share in Smartphone market. Well, I have done what I could to make people aware about this newly launched application.
Now, everyone should take initiative to spread the word about it.

Good Solution that, when you are in danger, this application can analyze the danger and send sms to your relatives and friends.

thanks Rohit for sharing such application which is useful now a day for every people.

thanks for sharing this info…

Hmm. Its good to hear that there is a app which has this functionality which traces location and saves it to the server..

I think fight back is a great app.. But I still have no idea how the real time location of the user can be handy for the helpline people..

It is very good app ,for everyone to take help in any type of emergency also Nirbhaya is better as compared to ‘Fightback’ because there is no any type of registration required to download and use it.