In recent years, Symantec’s Norton Internet Security on packages for end-users is a complete makeover. The comprehensive package of security tools works better now than ever before and offers an impressive list of features and new tools such as remote management and to analyze the stability of downloads.

Even when tests conducted by third-party benchmarks that evaluate the effectiveness of product safety, the program is at the upper end of the scale. CNET Labs performance benchmarks also suggest that users should be in their daily work, despite the considerable resources required under normal conditions with minimal impact from the Norton software. 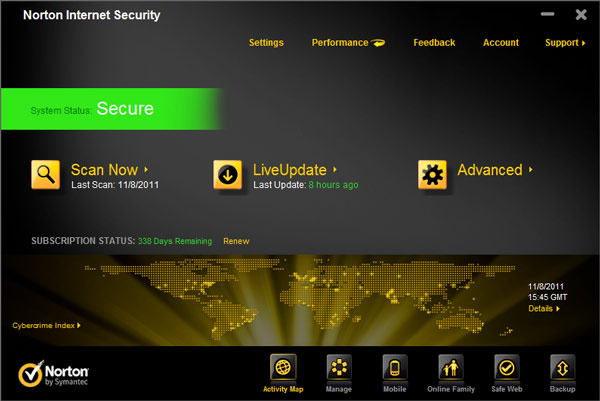 Norton’s package, for the third consecutive time offers a smooth and quick installation process. After starting the setup, the software has been around for a minute, ready to work. An amazing speed – especially if you compare the installation times of earlier versions.

During the installation process, you already interacted for the first time with Norton’s behavioral detection network, called “quorum”: The installation program asks the user whether the program must submit to the continuous improvement of the network anonymous data to Symantec’s cloud. A rejection decreases, according to Symantec’s protection not only prevents but otherwise active, automatic data transmission.

Even if you only want to use the trial version, you must register the program. Good thing is that you can do the registration within the application. Older versions of Norton opened, how many other programs that automatically the default browser to the registration site of the company.

Norton Internet Security 2012 has, in comparison to the 2011 interface even if the design is strongly reminiscent of the earlier version but some changes to the UI. The background is dark and still kept with yellow text provided so very contrasting and easy to read. There is a newly organized and simplified user interface for program settings, and an Advanced page, which among others includes a CPU meter. 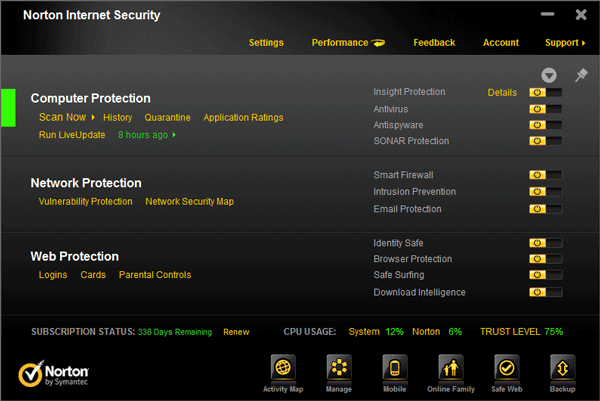 Power users can configure this page as a Home screen to perform important tasks faster. Furthermore, the indicator for system status has been optimized a bit. The balance between the available functions and empty land is managed in the current version much better, which affects the entire user interface much more balanced and enjoyable.

The access to the essential functions of the program is via three centrally-placed functional categories. Each of these categories is represented by an icon and a text: scan on the left side, live update in the middle and advanced on the right side. Clicking a category opens a built-in window that displays the category corresponding functions to choose from. Full scan and LiveUpdate also show continuously on current status reports.

In the lower area of ??the interface, a wide flat world map with blinking yellow dots can be seen. According to Symantec, each dot represents a threat to a Norton user. This figure is pretty to look at, but totally irrelevant to the safety of the user. Interestingly however, are a series of buttons that are located below the map. These allow to Norton Online Family, Norton Online Backup and Norton Safe Web access, without having to switch to the browser that you need.

After uninstalling the program, there remains about ten registry key. Other tracks are not visible. Overall, the installation of Norton is quick and easy. There are few configuration options, although these are necessary and useful.

There are not many new features in Norton Internet Security 2012 version which can be said to be very useful or offer improved safety concepts. In the bottom of the main window there is now a link to the mobile version of “Norton Mobile Security.” Beside it is a link to a new management tool called “Norton Owner”. The web-based tool, which automatically opens when clicking the link in the default browser allows centralized management of all on their own computers installed Norton products.

Users can check the security status of all devices (PCs and Smartphones), install Norton applications on remote machines, as well as renew license key. To use the above functionality, you need a service once the program is installed on the devices.

Another new feature is “Download Insight“, which was supplemented by a very useful detail: When downloading a file is now not only checks whether this represents a potential security risk, but also if you find information about is whether this file the stability of the computer impaired, as is well known that it is a poorly written driver. To determine the stability of the risk and used Norton anonymised data, originating from the computers of users who have consented to this.

Another innovation is to limit the bandwidth management, the uncritical Norton updates and reduces the data volume. This is important in many mobile data rates, especially when roaming. In addition, there are numerous other improvements in the layout and user interface that visually enhance the program and simplify the detection of features.

The porting of the Norton-360-Startup Manager was an excellent idea. About the Startup Manager allows applications that are not needed immediately (for example, the Instant Messenger), will shut down or delayed. This can speed up boot time on the computer. Experienced Windows users can also manually make these settings, of course, but simplifies the use of these tools work immensely. On the integrated community ratings it also provides valuable information about the applications available. 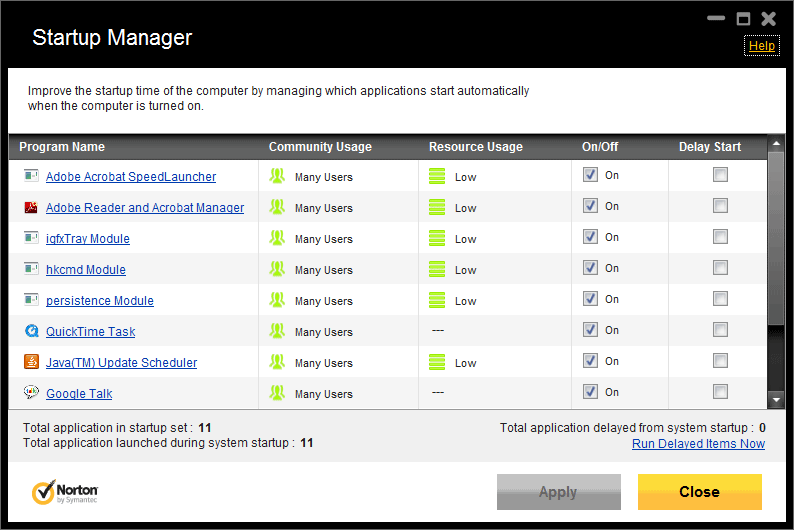 The Identity Safe has been improved and now comes with password features that are similar to those of LastPass, as well as cloud-based sync and vaults. These functions are offered by some other vendors for quite some time.

Google Chrome is finally getting support for Norton Safe Web feature – but unfortunately, not surprisingly, in Norton Antivirus. It is understandable that some features for Symantec equipped extensive, more expensive versions picks, but the decision to only selectively for Chrome Safe Web to make available is an unnecessary blow to the user in the user acceptance of the fastest growing browser.

The reputation-based protection checks of where and when the programs were installed on the computer, and compares these data with those of the 58 million users who participate in the based on Crowd-sourcing Norton Community Watch to decide whether one of the programs with a red flag must be provided.

Norton’s “System Insight” component has now been brought to version 2.0. The proprietary internal network from Symantec warns users when programs take unnecessary system resources in hardware. The function evaluates to the graphs to illustrate the system performance can be found by clicking on a tip, which was causing this. 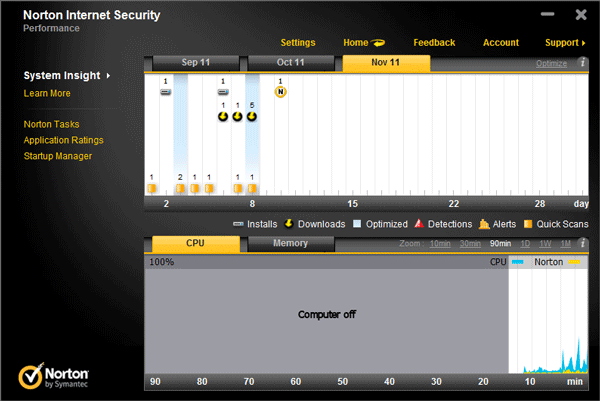 The third edition of Download Insight uses the same reputation-based logic for new downloads, and the fourth edition of Norton SONAR (Symantec Online Network for Automatic Response) looks for suspicious software behavior and automatically selects the appropriate protective measures. In the Settings window allows you to define how aggressively to proceed to SONAR.

In addition to the Quick Scan, Full System scan and custom scan for viruses and malware. Norton also offers a search for malicious links on your own Facebook wall.

Moreover, there are reputation-based quick scans, full scans and scans, the user can start if needed. These test programs installed immediately after completion and provide a summary of the run ready. More detailed information, for example, to scan duration as well as the perceived threats, can be found under the option “History” in the main window.

In the event that Norton has missed something during scanning, there is a link. However, this should in future be less an issue because of the reputation-based protection is becoming more mature and because of the always-on protection manual scans are no longer so urgently needed.

The bootable recovery tool is not new, but can now automatically create a bootable CD, DVD or a bootable USB device. The USB component is particularly important for systems without an optical drive, such as netbooks.

Norton provides free security offerings will continue. These include the Parental Control Norton Online Family, the “Lite” version of Norton Safe Web and the new Norton Power Eraser. The latter is a tool that cleans your computer of fraudulent anti-virus programs and other malware that prevents legitimate security tools can be installed.

Like the entire program has also the support options in a drop-down menu at the top right summarized on the user interface. With the menu item “Help” the Norton support site is opened, “instructions” lead users to a website with comprehensive step-by-step solutions. “Request Support” link in a new window takes you to the resources of Norton’s customer support. There, users can get around the clock technical support, chat, read the manual and search the FAQ and knowledge base.

There is also phone support available. But one trend, Symantec also makes its users access to our telephone help and tries primarily to refer to the online resources.

Norton’s fast installation and its extensive capabilities would be useless without a solid performance. Norton Internet Security 2012 can prove this by an exceptionally good results in third-party performance tests and performance benchmarks.

Norton 2012 in a practical test conducted by CNET took two minutes and 43 seconds for a quick scan and for one complete scan- 1 hour 43 minutes and 54 seconds. The average maturity of the full scan is roughly equivalent to the period of the previous year, whereas the slower quick scan to about one minute and 30 seconds was the average of the past year.

Benchmarks to prove the CNET Labs, the power of Norton Internet Security 2012 and Norton Antivirus 2012 is assessed as good, but not quite approaches the performance of some of its competitors.

In an independent tests for threat detection and removal, Norton excells. Tests in the first quarter of 2011 were conducted by AV-Test.org, reaching Norton Internet Security 2011 on Windows 7 PCs 5.5 out of 6 points for its protective effects, 5 of 6 points for his performance, and repair 4.5 out of 6 for ease of use. In the overall standings, the product thus reached 15 of maximum 18 points and was one of the better of the products tested.

Norton continues its chosen path already from 2009 to 2011 and delivers with its excellent detection, quick scan times and low number of false positives again an impressive performance from. However, some of the tests clearly show that there is little slip-up.

Symantec provides with its premium security suite, Norton Internet Security 2012 is one of the best commercial security solutions on the market. The seamless integration of behavior-based threat detection combined with the attentive observation of the stability of the program downloads make it a compelling choice for the protection of computers.

Even the extras of the suite are noteworthy, especially for users who want to use a single software package and need support for mobile devices. The small negative impact on the performance of computers, strong safety and useful features are the hallmarks of Norton Internet Security.

There is no doubt that the product provides a complete, robust security, the user can rely on. Overall, this is Norton Internet Security at one of the best currently available security solutions.

Thank you Sim. Glad to know that you liked it. You will continue to see such detailed posts from now on 🙂

but noeton slows down pc

Nice post bro……..But this application is too heavy to use…….eat much of RAM of your PC

Heavy ???
NIS is one of the most lightweight AV