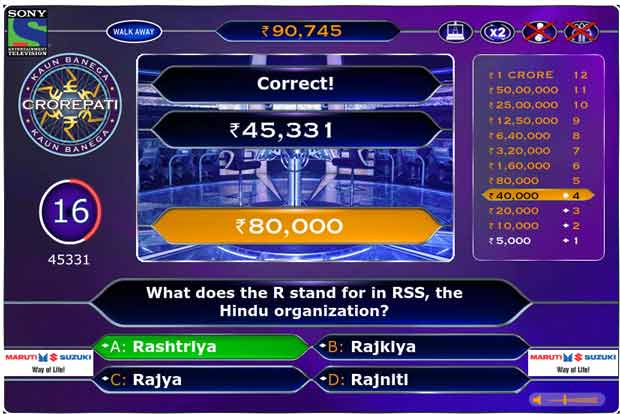 Kaun Banega Crorepati season 6 is back with Amitabh Bachhan as host. This reality television show also has online version as game. It can also be used as an alternate way to participate and reach the hotseat of the KBC show on TV.

KBC 6 Online game is a venture of SONY itself and you have to register with valid email address before starting the gameplay.

Game begins with their signature theme as background music and you can select the level to start the game. Once selected, Questions according to the amount of money chosen is asked.

I don’t think I should give any instruction further on how to play game. It is completely similar to what you see on Television.

Only different thing is the selection of Lifeline – 1. Phone a Friend and 2. Ask an Expert. In both cases, answer given is on screen instead of calling someone. Most of the time, I noticed that answers given by these lifelines are correct.

According to the rules published by officials, There are certain phases, from which a maximum of five winners will be given studio passes to Kaun Banega Crorepati.

You must be 18 years old to be valid contestant and KBC 6 Online Game will be live till 10th January 2013.

Respected Sir
i want to register in kbc 2013 ,so how can i register please send me in details