Quick Boot Mode in Windows 8: What Is It And How To Disable

Boot time of an operating system is always one of the most discussed items when a new version is released. Therefore, manufacturers are always looking for a way to improve the startup performance of their systems. For Windows 8, the changes are easily noticed thanks to Fast Startup or Quick Boot mode as people call it.

Microsoft added this as a default feature in Windows 8 to reduce boot load timing and start the new session as fast as possible. If we go by the demo, it showed that Windows 8 PC on SSD booted in 7 seconds only.

Really awesome, isn’t it? But lets us go into depth of this feature and learn more about Windows 8 Quick Boot and its limitations.

What is Widows 8 Quick Boot

According to what was published on the MSDN blog, Microsoft conducted a survey of consumers in order to know how many people actually turn off the computer and how many use the hibernation/standby operating system. The portion of Windows users who shut down the PC at the end of a day’s work was much larger than expected, reaching 57% of respondents.

Despite knowing that the power consumption of computer is low, many people said that they turned machines off to save on electricity bill. Others said they just like to “start from scratch” with the RAM free of any residue.

Therefore, Microsoft has developed a way to make computers with Windows 8 which will not consume energy when absolutely turned off. And then launching a session whenever turned ON with short time interval between pressing the power button and using the system.

In practice, the new feature blends the traditional startup mode with hibernation. The great thing that Microsoft was thinking of a way to just make use of the core OS from hibernation mode and the rest of the functionality is indeed off. That way, when the power button  pressed, the part of the OS that takes longer to load is already initialized, while just load other resources.

While the normal boot process of a system, you must load drivers and services, while with the fast boot mode part of the service is read from a hibernation file – which can be found on your hard disk by running the command “dir/s/ah hiberfile.sys” at the system prompt. Thus, the boot time is from 30% to 50% faster.

Not everything is perfect

Despite being a great way to speed up the operating system boot, fast boot mode also has some problems. Many applications require a restart of Windows for the changes to take effect, a very common practice in anti-virus and other security applications or libraries that need to modify the system registry.

With Quick Start enabled, most of the changes end up not being applied because the hibernation file used at boot time of the system is recorded before the machine off (obviously). So, the next time you turn on your computer, Windows has no way of knowing what modifications applied before finalizing your shipment.

While applications are not suited to work perfectly with fast startup mode activated, the best way to avoid some important information being lost during the boot operating system is disabling the feature. The procedure to accomplish this task you will find below.

How to disable it?

The process to disable the fast boot mode of Windows 8 is pretty simple. Check out the steps below.

2) As a result screen that opens, select the “Settings” in the rightmost column, and select the item “Choose what the Power button do.” 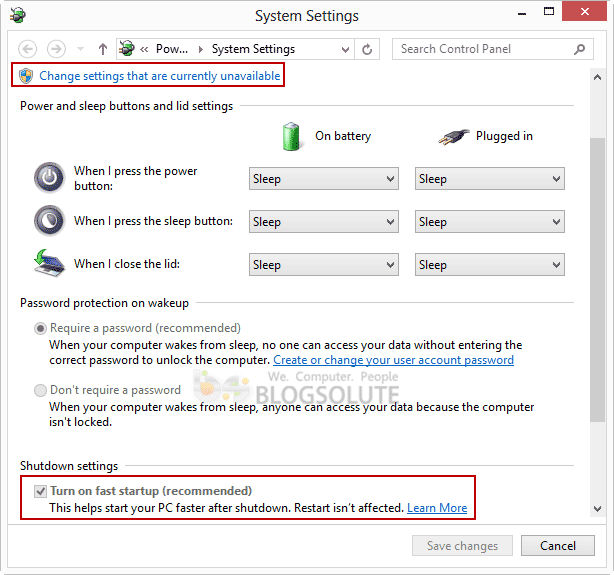 4) If the items are disabled and you’re unable to make the desired changes, click on “Change settings that are currently unavailable”, this further up the screen. Do not forget to press the “Save Changes” for the change to take effect.

Ready! The Quick Boot Mode is disabled. To enable it again, just follow the above steps again and check the “Fast Start (recommended)”.

In Windows 8 Pro 64bit How to enable .net framework with out internet connection… Please as soon as replay me …..

Run CMD as administrator and run the following command after inserting Windows DVD.

Change the drive letter with the one where DVD/USB is inserted.

With Quick Start enabled, most of the changes end up not being applied because the hibernation file used at boot time of the system is recorded before the machine off (obviously). ”

Look in the power settings screenshot you posted. It _clearly_ states that fast boot does _not_ affect restart. So your point is wrong as when the system restarts, it does a full boot, not a quick one.

Many applications require a restart of Windows for the changes to take effect, a very common practice in anti-virus and other security applications or libraries that need to modify the system registry.
With Quick Start enabled, most of the changes end up not being applied because the hibernation file used at boot time of the system is recorded before the machine off (obviously).

Well, possibly not so obviously. It says “Restart is NOT (all big letters mine) affected,” which would indicate that if a program tells you you must restart to complete, that the restart – not being affected – will work just fine.

…If there is any error in this logic, and you read this, would appreciate your further input? tx

does not help when unable to access win 8 in the first place!