How to Remove Unwanted Objects from Photos Online Smoothly

There are Professional Software tools which can remove elements from photographs smoothly. In a way, that you won’t realize that there was something which is now missing in the photo. But, problem is using these software applications isn’t easy for everyone.

Take example of Photoshop which can do wonders but not everyone has skills to use it properly. So, here I introduce an awesome tool which can remove unwanted objects from photos with few clicks and doesn’t require any skills. And result outcome is also professional that you can’t even guess.

InPaint is a tool available as online image editor as well as offline which can intelligently delete objects from photographs. What you have to do is select the object using marker and then press “InPaint” button which looks like “Play” symbol of Media players.

Wait for a second or two and results are in front of your eyes.

InPaint doesn’t only removes the object from photo but also it fills up the white space with background texture depending on surrounding. For example: if you try removing an aeroplane flying in the sky from a photo, InPaint will remove the object and fill it with bluish sky color so that it looks blended with surrounding.

How to get Better Results

Don’t try to select complete object at one and remove it, take it piece by piece especially when object has multiple backgrounds. For example: if an object is kept on a table, then it will have two backgrounds namely the table surface color on lower part and wall color. So, in such case, break down your removing project into two parts.

Here’s what I did in less than 2 minutes. 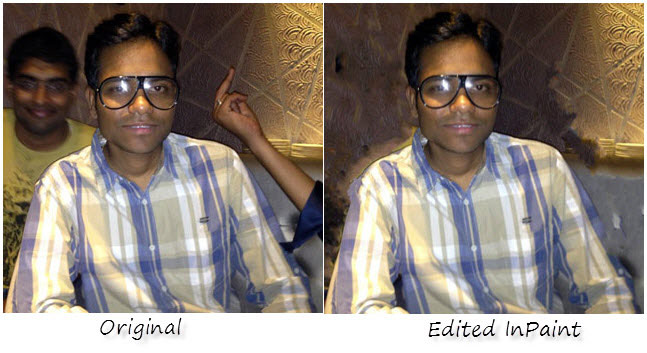 If I would have spent more time working on it, it would have looked better. I am sure you will do it 🙂

Visit WebInPaint which is online version or download it as application for Windows/Mac. I found online version faster in processing image in my tests. You carry out your own and decide on it.

This is something cool. I am going to try it out. I was looking for such a software from Long time. In my many images I want to remove the objects but never knew How to do it.

Thanks a lot for the Post. Will get back to you if I will face any issues.

awesome sharing I think this is best alternate of Adobe Photoshop

Thank you for this. Its amazing how you you explain this process in the most simplified manner. I have millions of such images that i had never thought of editing. You are the best let work begin right away.

Definitely useful to know. I’ve needed to know this countless times to fix a picture – wish I looked it up before.