GRUB is a Boot Loader for Linux but there is an occasional failure when you are Dual Booting Windows and Ubuntu. Generally, we lose access to Linux Bootloader when you install Windows over Ubuntu or Format the partition using Windows. Reason behind is damaged Master Boot Record (MBR)

Boot-Repair is a program to solve and repair problems related to GRUB Bootloader caused due to our negligence. It can repair GRUB in few clicks thanks to it’s simple graphical User interface making easy even for not-so-geeky users.

Boot-repair restores access to any operating system that has been lost, and removes entries which are no longer valid. It allows you to restore the Master Boot Record if it has been previously saved. Then, lets you select the partition or disk on which to install the GRUB, and finally allows you to swap the boot order of the various systems installed.

How to repair GRUB Bootloader

Boot-Repair can be used in general session but you need it most during emergency when you have lost access to Ubuntu. So, it is obvious that you use it by running a session on Live CD of Ubuntu.

Open a terminal and type:

After successful installation, you can access it from Applications Menu. 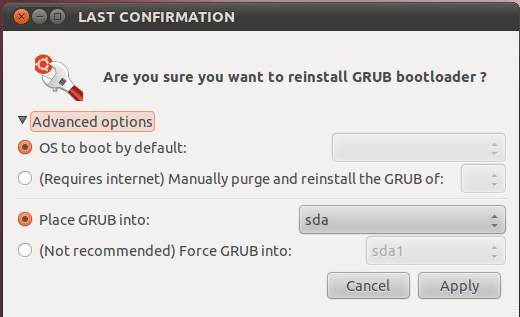 Select the options accordingly to fix the problem. For example, you may select OS to Boot by default (in case of multiple operating system) or manually purge GRUB or place GRUB into SDA. Click Apply, OK to continue.

When you are done, confirmation window will pop-up and you will have to restart the system. Boot-Repair is indeed a good solution to fix general GRUB Bootloader issues occurring frequently. You can also Download Boot-Repair from Launchpad.