Sachin Tendulkar Facebook Official Page- Can You Add As Friend?

On Page, he has added all his achievements as Life event on page. This just not includes the one from Cricket career but also recently taken Rajyasabha Oath.

As a opening post, he welcomed all his fans by telling about his cricket dream and thanked all for support. 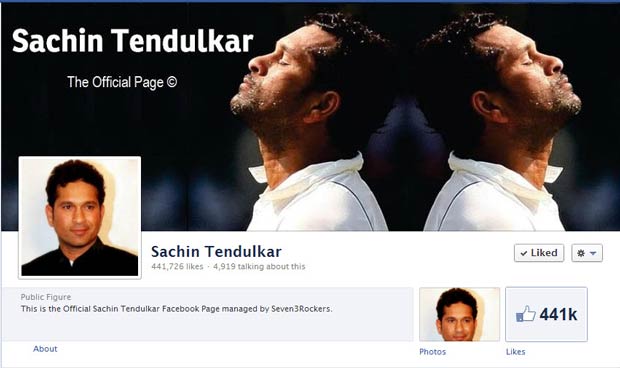 Not exactly. Though, it is a official facebook fan page, he doesn’t write himself on Facebook. It is managed by Seven3Rockers as also stated in Bio. It is a Media/Telecommunication company which also has celebrity management. All updates might be published with prior consent of Sachin Tendulkar himself and they are basically responsible to handle comments and Fans interaction. Is important that as a celebrity he manages well his community and interact with them, for more of this topic read more.

Can You Becomes Friends With Sachin Tendulkar on Facebook?

Sachin Tendulkar has joined Facebook but not it is not a profile but instead a Page or you can say Facebook Fan page. You can LIKE the page and updates will continue to flow on your timeline whenever published.

No that doesn’t exist. Even if you find one, it is fake. Moreover on Fan page too, I didn’t see any personal thing being shared apart from opinion on Cricket and recent case of Unmukt Chand (Under 19 Indian Cricket Team Captain).

Sachin known himself as god……………hmmmmmm……This is India, anything is possible

Thanks for sharing this information i liked him

simply the great man in cricket and in character.