Samsung S3 Ad Made Fun Of iPhone 5: How Web Reacted & What People Said

Apple sued and won a patent battle with Samsung where Galaxy S3 design was said to be a copy of iPhone. Looks like Samsung isn’t among the ones who will sit quite. In a recent advertisement campaign, they directly attacked the new iPhone 5. Samsung teased and made fun of iPhone 5.

We all know how iPhone 5 disappointed us and passed on old things in new packet under the name of innovation. Here is a advertisement poster which is said to be published in US newspapers where Samsung made fun of Apple iPhone 5. 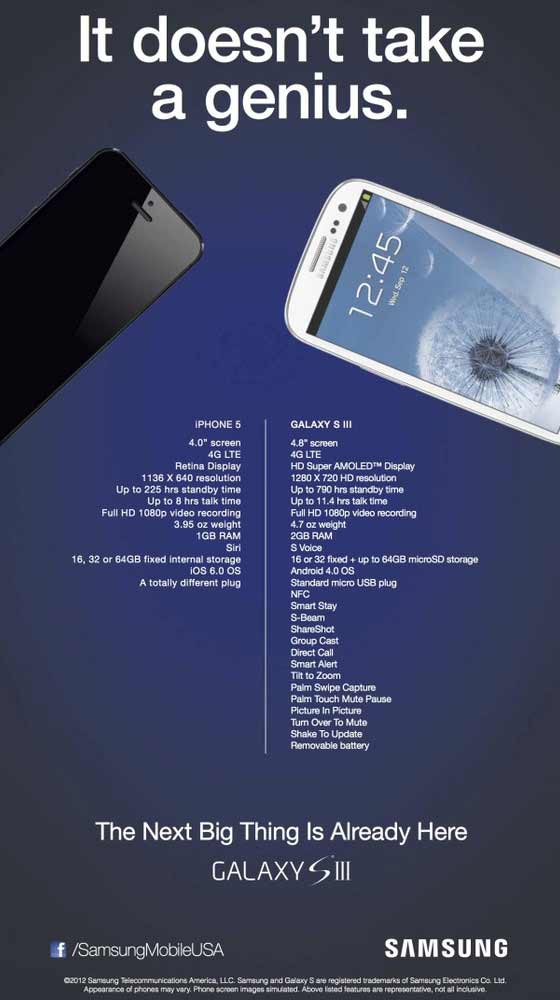 By saying “It doesn’t take a Genius”, Samsung might want to convey that you don’t have to be a genius to differentiate between two smartphones. In other words, Specs of phones speak for themselves and tells us which one is best.

One funny noticeable thing in number of features mentioned is about Battery charger. iPhone 5 has totally different charger whereas Samsung simply says Galaxy S3 has the standard micro USB charger. Which means that it is easily replaceable and interchangeable with other phones having micro USB plug.

How Web Reacted To This Funny Advertisement

From what all I saw in my social circle and some forums I browsed, I noticed that people are more in favor of Galaxy S3 or better say Android (including me).

On other hand, some Apple Fanboys made similar poster as a reply to Samsung saying “Don’t settle for Cheap Plastic”. 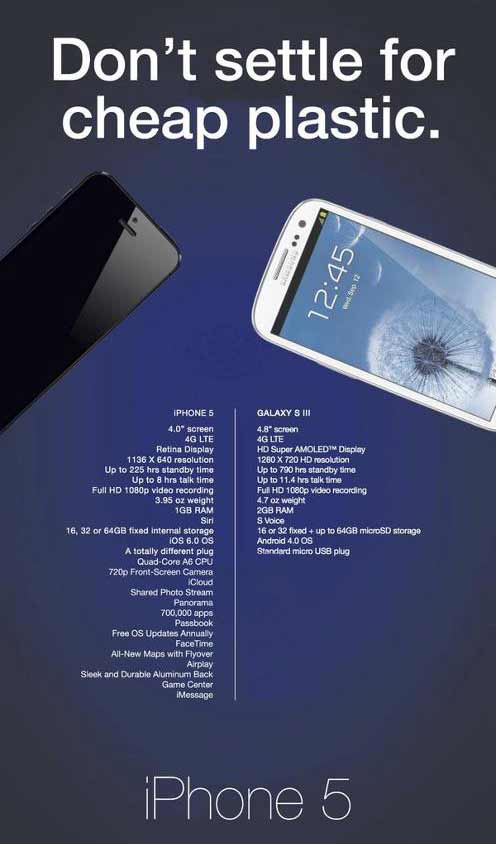 Here, they cleverly deleted out some noticeable features of S3 and boasted on iOS 6 features not available for everyone and also not so useful. Maybe useful but they already exist in other Operating system under different name.

And here is a direct reply to all the features of iPhone 5 boasted by Apple fanboys. (Comment source)

Recently, Micromax Ninja made fun of Samsung Galaxy Y. But I would say that Advertisements should not attack brand names directly but this time, it isn’t Samsung who started. Dear Apple, when you have done it, be ready to face it. What will you say on this?

One really good feature of the iPhone/iPad/iPod is the way albums are displayed when you hold it in horizontal style but really annoying feature is to maintain that beauty.
How annoying? you ask. Because you need that shitty iTunes to sync songs plus when you sync a song, all the ID3 tags won’t get synced. The most problematic is the artwork which doesn’t get synced even after trying like thousands of times. It depends on luck to successfully sync all the ID3 tags to a trackalbum.

Therefore, I too recommend Samsung Galaxy S3 over any iPhone be it iPhone 6/7/8… 😀

Yeah, iTunes is like Internet Explorer of Apple. You simply cannot get rid of it.
And yeah.. you don’t have to appreciate Android unless you have to use iTunes for adding single music track 😉

iPhone never struck. We can use it. Very smoothly and flexibly

Still i believe iphone 5 has the potential to generate higher sales , as far as i know iphone has already got pre-booked more than the expectation.

I don’t know and not sure about its potential but unfortunately one thing is true that it will again break records of smartphones sale in US. Yes, there are still people who do not care about the specs and features but only thing matters to them is Apple logo on device.

Apple is just a U.S. boy.
It is famous and will remain famous only in U.S. whereas Samsung is famous worldwide just like Nokia is.
Also Samsung has got the support of Google.

Really who wants a phone if most of the features specified (talking about maps and other Geo-location features) doesn’t really work in your country.
Apple mainly focuses on U.S. so U.S. has got all the support and therefore I have no objection by Apple getting so much famous but Apple should expand and focus on other users too who are using its products.
No one will be happy if they are not getting any benefits mentioned by the company.

For Samsung, it has got Google Maps which covers almost the entire world and all the features of it are available worldwide. whereas Apple’s own Maps covers only U.S. & maybe U.K. and other such countries.

Public wants features which can be used and Apple is doing it the opposite way for countries other than U.S. or U.K. or Europe etc.

People buy iPhones because they want to appear rich or actually reaffirm it. Smart people make smart decisions; that’s why from my point of view anybody with an iPhone is a low iQ person, not so much for the specs of each phone (well yea also that) but for the fact that they are obligating them selves to use iTunes for every addition/change.

Owning a Iphone has become a prestige issue. There are better verities of laptops available than Mac. But owning a Mac is status symbol. But at what cost? Everything under the sky has got a life of its own. Nobody goes for Wolfram but for google. So, let us wait and watch the fun.

Very well said- “Nobody goes for Wolfram but for Google”. 🙂
Obviously, it has become status symbol for some who don’t have enough knowledge about gadgets in market. And those who know which one of them is better have clearly raised their opinion on web.

I’m enjoying these posters and so forth! I like both Android and iOS but I must say after dealing with Android for a few years I’ve ready to throw my Android phone into the wall!!! I view Android phones as to Windows computers. Both crash, freeze, and always need extra care to take care of them. Apple has worn so many hearts over the past years but both Android and Apple has their differences. I do not like the fact that Apple charges alot OR that Apple makes you have to use Apple and Apple products ’cause that makes things harder for me; being a former windows user. I have to do extra’s when I bought a Macbook Pro ’cause I needed an additional cord to connect to my flat screen. My phone didn’t sync with iTunes and my external hard drives had to be reformatted. I’ll stick with the iPhone 5. It’s always smooth sailing with an iPhone!

Who started this whole thing, thats the question? Sick of these rich people arguing like kids!

There’s no doubt that Apple is the brand whose sales chart goes up by its only name. The name Apple is enough to describe about its product. But this time the fight among Apple & Samsung. But I got Samsung Galaxy S3 Comparison with other of Samsung Models & Nokia at http://howmobile.net/samsung/2345-samsung-i9300-galaxy-s-iii.html and http://howmobile.net/samsung/2336-samsung-galaxy-s-iii-i535.html. It was very floated in market & News also that the Galaxy S3 is the competing Model with iPhone also. I was finding the right place where I could make myself clear & doubtless about that for what should I go iPhone5 or Galaxy S3. Samsung Galaxy S3 as it has much more features than iPhone 5. Like Big screen, NFC, 2Gb RAM etc.