Recently, I was trolled by one of my friend on whatsapp with a funny behaving photo. Image looked like a Girl in thumbnail preview but when I opened it to, it turned out to be a Gorilla showing middle finger in full screen. So, how is it done? Learn to send fake images on whatsapp and troll your friends. 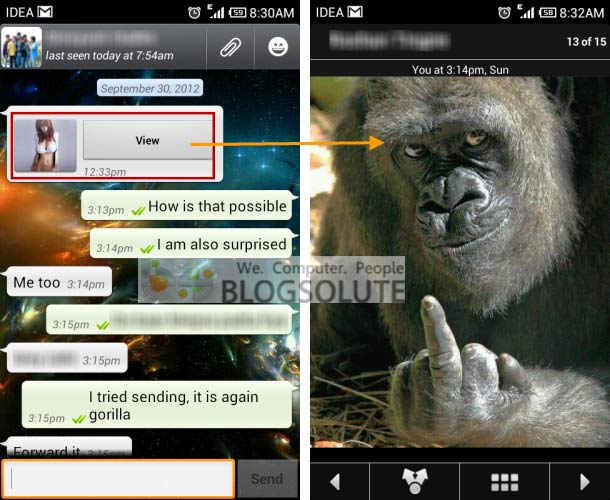 How To Send Fake Photos On Whatsapp

It is made possible using an Android called Magiapp. You have to select a fake image (preview of image to be shown) and the original image (full screen image). App detects whatsapp installed on your phone. Image will be generated after asking you about quality and then, it will take you to Whatsapp Friend list. Select friend whom you want to troll. 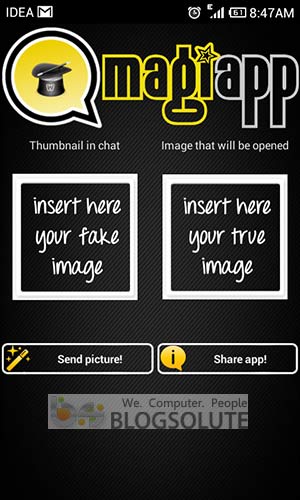 Once made, the same image can be used to surprise other friends too. Just forward the image from Whatsapp conversation. Sharing won’t work, you need to use Forward option only. Though, it is made on Android device but the image can be sent to any whatsapp user maybe iPhone, Windows Phone or Symbian.

I couldn’t exactly find the technical reason behind it. But, the Magiapp generates a single PNG image out of two images selected. This is quite big in size and stored in root of SD card. If you share this image directly, it works the same way as it did above.

Thanks Abhi Kurve for the Tip!

And u tried to troll me with the same! I forgot to open the image though. Nice trick.

Hi. Awesome app. I’ve been caught once or twice too.

How do I “forward”, “share” or “send one I’ve already received? It doesn’t seem to work. If I hold the image in whatsapp only the share options comes up, which just sends the last image.

Am I doing something wrong?
Suggestions?

Hi NouDurnez, If you want to share the one you already received, FORWARD it. Don’t use Share or Send or any other option which will result in sending the original image and not fake.

Any suggestions on how to do this on an android Samsung Galaxy s3 ?

This trick is independent of Phone model you are using.
Don’t open the image by clicking “View” in Whatsapp. Just long press in blank area besides image and “Forward” option will come.

Another alternative app is “Z- Photo Fake for whatsapp” . I guess they change the EXIFF embebed thumbnail on the foto or something similar…
Regards..

is there any app for ios?

Aren’t you able to see the fake picture on C5 or unable to make it?
You cannot create a such image because the App is for Android and not Nokia. However, it should display correctly on any phone running Whatsapp.

Is there any such app for iPhone?

There is also a solution for iPhone and it’s called fhumbapp http://www.fhumbapp.com

hi
i used magiapp in my samsung galaxy y young but after the whole process it does only shows the real picture, not the fake thumbnail.any suggestions to correct it.