In this age of technology we have the best gadgets and features to experience the media world with newer & more efficient ways. 3D videos are one of them surely. Now converting your 2D media into 3D is quite amazing thing to be experienced. All your childhood memories recorded and fortunately we have Software To Convert 2D Video to 3D.

Here we have listed top Software To Convert 2D Video to 3D. We tried our best to find a freeware software but no luck. Either way the Demo versions are enough to give you the 3D experience.

I was so sure about playing 3D videos on my Laptop’s normal TFT screen as I have been already introduced to a News paper which is in 3D. I was amazed and thought this sure can happen on any screen, you just need proper 3D glasses. As per my experience, I would say, I don’t need to buy a 3D Television just to watch 3D movies now. If you don’t have 3D glasses, you can make one at home. Learn the tutorial from here and watch 3D videos without 3D monitor.

These Demo versions are fully functional till they are expired & also have watermarks but that is not going to be a distraction while you are watching your converted 3D videos at home. You can convert your videos in your desired formats also, like AVI, MP4, WMV etc. To have a proper 3D video, you must understand the 3D depth effect which gives RED & BLUE shadow effects to create a 3D illusion. The more effect you give in, better is the 3D effect quality. It depends on the size & resolution of your screen. Well, this little knowledge about converting videos into 3D would be good enough. Let’s go through the list of the software. 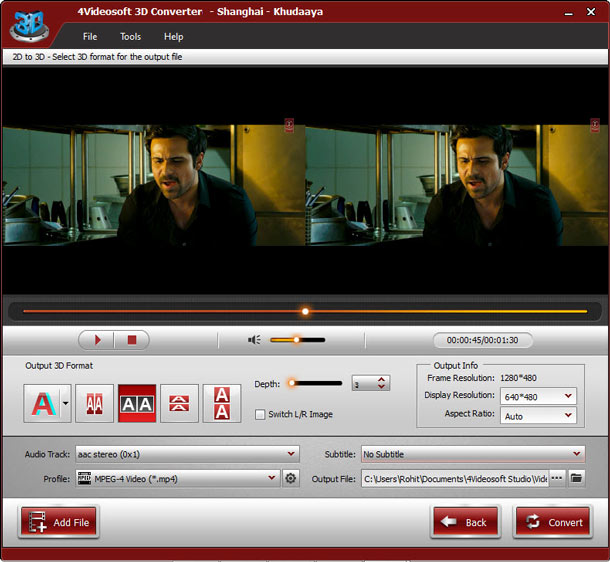 4Media 2D to 3D Converter lets you convert videos in almost every possible format and variable resolutions. As you can see the highlighted portion “3D Depth” is the main setting. Before converting, you can preview the final output. More settings to get low, medium & high qualities for both video & audio is also present.

Personally, I am using it and found that it worked seamlessly for both Intel Processors with dedicated AMD Graphics card. For AMD however, you will have to download drivers which software automatically prompts while installing.

Comparing the conversion speed, it is not fastest but still takes the same time like others. But I would like to appreciate its quality of video conversion. Codecs involved in converting 2D to 3D videos offer superfine quality and real 3D effect on any monitor.

Before purchasing, you can always download free 4Media 2D to 3D Converter.

Movavi 3D Converter comes with 30 days of trial period. In this converter, you can change the 3D visuals settings above the 3D Depth effect. It is almost same as other converters with extra 3D settings.

Axara 3D Video Converter gives better quality of 3D effects to your videos. This converter converts videos in MP4 format. In the 3D effects settings, you will get two options as RED + BLUE  &  RED + CYAN. Select RED + BLUE as per the color of your 3D glasses.

All the converted videos are playable in your default media players. No need of using a 3D video player. You may give try to any of these Software To Convert 2D Video to 3D and Enjoy your videos in 3D now.

I would say get 4videosoft 3D converter because not only it supports 2D to 3D conversion but also 3D to 2D videos. That would be needed in rare case but the support for NVIDIA and AMD graphic cards will matter. You will be able to use this on any computer irrespective of its configuration.

Another reason would be 25% discount on retail price which makes 4videosoft economical too. 🙂

Really helpful, Ankit. Thanks a ton!

i converted a movie in 3d it is playing in 3d.i have 3d glasses but i am not able to see movie with 3d effects.weather i wear glass or not the effect is same.plz help me.

the last one is better

Can these players play 3D side by side format

Dear brothers, dont watch with red cyan glasses. It will hamper your eye sight . This is from personal experience . Lot of trouble