Titanium Backup: How to use – Back Up and Restore Apps Data on Android

While installing new ROM, Backup is recommended and Titanium Backup is first choice. It takes backup of Apps and even the data so you don’t miss out anything after flashing or wiping system. Interface of Titanium is may look confusing to some users so here is a complete guide to Titanium Backup.

Before we begin, it has some per-requisites. Phone should be rooted and BusyBox installed. These things are MUST and if not, then you should take necessary actions to root and BusyBox can be installed from Market.

OK, you have installed Titanium Backup. On opening the app, first tab shows the overview status of Phone system. Grant Root permissions to Titanium Backup which will be asked on first run. We are ready now! 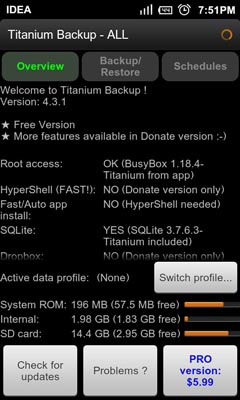 Second Tab is “Backup / Restore” where all apps of your system are listed. Each one has some icon infront it’s name. May be exclamation or a smiley. What do they mean? Go to App Menu and click on “Legend” to know their meanings. 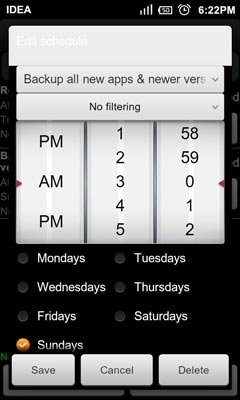 Specifying Backup Location – This is usually /mnt/sdcard/Titanium Backup but if you wish to change then Click on Menu and go to Preferences. Dropbox is also supported but that option is available in PRO version only.

How to Backup or Restore Single Android App

Click on Second tab named “Backup / Restore“. Select the app you want to backup and Option menu will pop up offering various buttons to Backup, Freeze, Wipe Data and Restore. 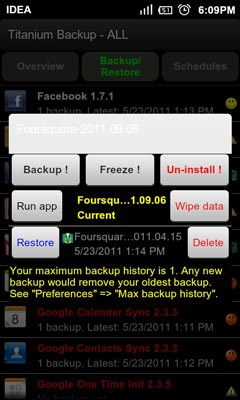 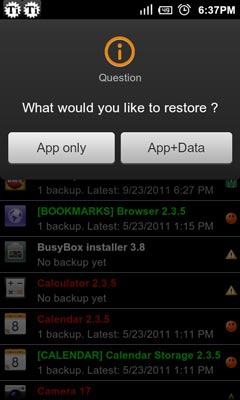 Previously Backed Up apps could be restored by this method.

Wipe Data – It deletes all data related with the app. For example: Login details of Dropbox or Preferences.

Freeze – (Only available with Titanium Backup Pro) is a very useful option that lets you freeze up any app that you don’t want deleted, but don’t exactly want it to be running either.

Uninstall – Removes or Deletes the app from System completely.

Well, taking backup of each app one by one is bit laborious so, we also have an option to backup apps in batch up which is the case most of the times. Batch Backup operation is mostly used while switching to Custom ROM.

How to Backup All Apps and Data

Being on Backup / Restore Tab, click on Menu and hit Batch. Options are plenty here but we will focus on Backup as of now. 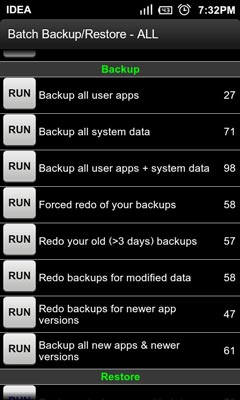 Backup all User Apps – It allows to back up all apps installed by you. Doesn’t include the data or you can say just Installer files APKs are backed up.

Backup all user Apps + System Data – It’s a complete backup solution which on restoring gets back all the data associated with it. Though it is Recommended mode but sometimes (Rarely), the data backed up associated with Apps isn’t compatible with new ROM. For example: If you are switching to Custom ROM which also upgrades your Android version then old data restored can create problems like Force Close.

Restore Missing Apps with Data lets you get back the apps apart from the ones already installed along with Data associated with them.

Restore All Apps with Data is recommended in most of cases when Data is completely wiped after switching to new ROM. 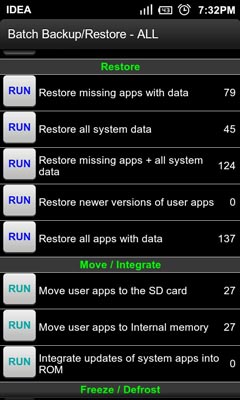 Restore Process isn’t that superfast as backup was. Each App restoration will take you to installation screen and user action is needed. If you have 100 apps then you need to click on Install 100 times.

Even Auto Restoring feature which doesn’t require user action and takes benefit of HyperShell to accomplish that. This function is present but offered only to PRO users.

I hope you are now familiar with almost all features and their working required to back up and Restore Android Apps using Titanium Backup ? root.

In between Backup and Restore options there is also an feature called “Move / Integrate” which lets you move apps to SD Card and free up some space. Though it sounds good but situation isn’t that cool as many apps doesn’t work when moved. You need prepare SD Card for App to SD before proceeding.

Titanium Backup has some more to offer. You can send list of installed apps to your friend via Gmail or Bluetooth. 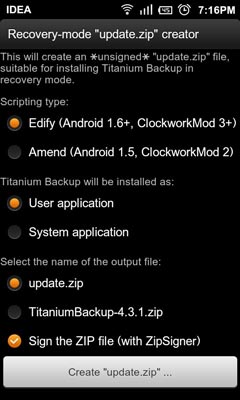 Another thing is you can install Titanium Backup via Recovery by flashing update.zip To do this go to Menu > More..> Create Update.zip Before that, I would recommend installing ZipSigner 2 from Market which signs the update.zip created so it is usable directly.

That’s all. I expect this article to be complete guide to Titanium Backup. If something is missing or faced problem or come across trivia then let me know by commenting.