How effective are Torrent Speed Boosters | Truth Behind Fake Booster

Torrent Speed Booster, just the name looks fancy and many of us try it blindly in the claim to get 200% boost on current speed. Tried various Torrent Boosting programs but do they really work? Let’s have detail to know the truth behind.

I tried many such torrent speed boosters when on Dial Up connection with an hope to get atleast a 5 kb/s boost. But these programs are just a showpiece with graph moving according to speed which in reality is not because of them but original Torrent client. 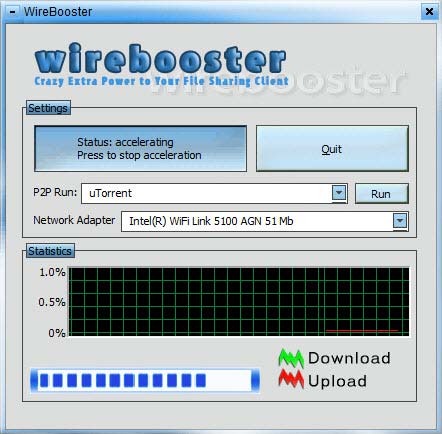 Visual graphics on the program are just for your satisfaction that something is working to get you maximum speed but let me tell you Torrent speed depends on following:

In Windows XP, there used to half open TCP / IP connection limit which had to be patched but right from XP SP2, its no more required. I guess most of you are ahead that with major share of Windows 7 Users.

How to get maximum possible speed on Torrents

Above factors are responsible for torrent speed and mind you, you cannot get speed more than what your Broadband connection offers. Still, instead of using Torrent speed booster, try these steps to ensure maximum speed.

Configure Port forwarding: You need to configure port forwarding so your router knows that the incoming connections are for Bittorrent and will be allowed through (forwarded) to your computer.

This is probably done automatically via UPnP in most of torrent clients.

Limit upload speed to 40%: Instead of giving equal share of bandwidth to seeding, restrict it so that you can get it on downloading.

Increase number of Connections: by default it is 200 in uTorrent and range should be 150-200

Tracker Selection: Public trackers usually give poor speeds compared to Private trackers, but they have more content. Be wise in selection.

If you think that all the above configurations are fine on your system, I don’t think you need some Torrent speed booster just to show off uselessly.

Speed boosters may not be of any use but you can increase upload ratio on torrent trackers using tools.

P.S. Above mentioned are my experiences and lookout which may vary with your opinions. Feel free to comment if you think so.

I will give a try.Hope speed will boost

these programs do not work at all

I have tried a few speed boosters in the past and within a few minutes I had realised that they didn’t work at all, I didn’t see any difference in speed after starting them. The bottomline remains that you’ll only get that much speed as your ISP allows, look for good seed peer ratio though

Only luxury us that you can monitor .. No increase in speed !!!

Thanks Rohit for the findings.

With havin so much content do you ever run into any issues of plagorism or copyright violation? My blog has a lot of completely unique content I’ve either created myself or outsourced but it appears a lot of it is popping it up all over the internet without my agreement. Do you know any methods to help protect against content from being stolen? I’d certainly appreciate it.