It is possible to get the exact location of any train running on Google Maps on realtime basis. Indian Railways launched an online railway train tracking web application called RailRadar. It lets you spot your train’s live position, route and timings whether it is on time or delayed.

Railradar can be accessed at railradar.trainenquiry.com on mobile device or computer browser.

Application has simple interface but can confuse you at first sight. This happens because what all you see is colored routes and arrows on Google Maps. But let’s understand how it works and you will get it. You can also use Free Windows 8 Indian Railways Enquiry Apps to get Live position of trains.

How To Get Live Position of Indian Train

On the left sidebar, there are two tabs – Trains and Stations, click on Trains. In the box, type the name of train or number. I would recommend typing number because there may be more than one train with similar name running on different routes. 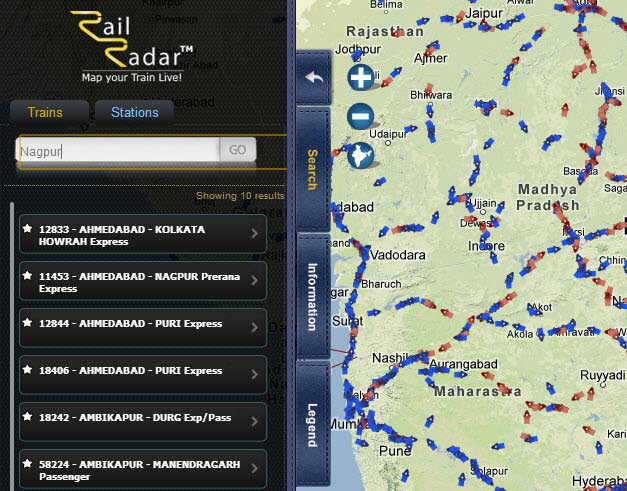 Result will automatically appear below the box. Click on the train name and watch out for its position on right side in map. Train is shown by an arrow (signifies direction of moving). If color is blue, it is on time and running late if it is red.

As written on their website, location, and status of trains shown on the map are typically 5 and more minutes delayed from the real time. So, calculate it accordingly.

Get Trains On Railway Stations

You can also search for trains nearby or at stations. For example: If you want to see trains reaching or leaving Nagpur station, just enter station name. This can be useful in case you want to know how far is your train from reaching the station. 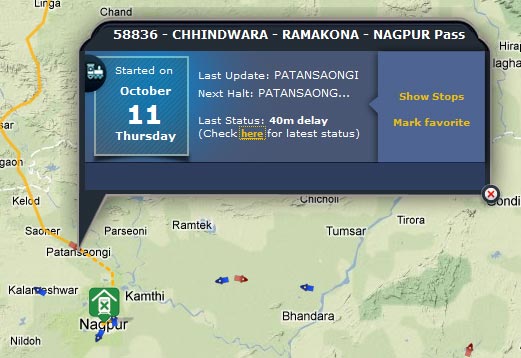 When you have spotted the train shown by an arrow on maps, clicking on arrow open a dialog box. This dialog box has information about running status which includes delay timings, status update at location and more. Actual current status can be obtained by clicking again on “here” text inside box. 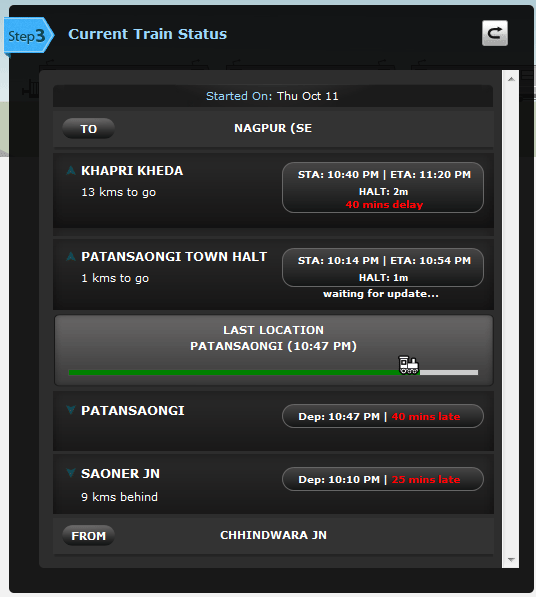 I am really impressed with this forward step taken by Indian Railways. What so you think? Now, let’s hope that they do something for IRCTC website too so that you don’t have to use any trick to book tatkal tickets.

This one is the nice move my Indian Rail. Hope they will also do something soon for RAIL ALSO 😛

Its a very good initiative for the facility of its customers but I doubt that it might be helpful to the guns or terrorists too to perform their crimes with perfect plannings.