Turn any Phone Display to 3D with TOYin3D 3D viewer

It is said that 3D is a future of Display Technology. Will not go in to debate whether its true or not but only 2 smartphones in market have Stereoscopic 3D display as of now- LG Optimus 3D and HTC Evo 3D. If you aren’t owner of one of them, read ahead.

TOYin3D is an innovative product developed by Estado Latente, Spain which is just a box with pair of eyeholes enabling you to see Smartphone display in 3D. It is first of it’s kind, 3D viewer for Mobile Phone.

What you have to do is just slide your smartphone on other end and peep into eyeholes at your end. That’s it, your regular Smartphone is now having 3 Dimensional display! 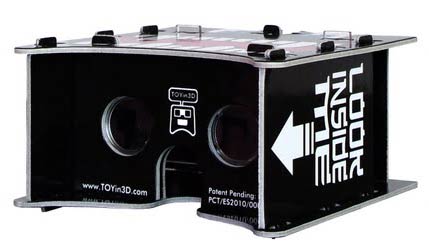 Well, the idea looks geeky and you may feel it awkward to see your mobile phone through a box especially in public places. But, if you are really curious to test out 3D display on your current smartphone, then you have only option.

TOYin3D comes in various sizes according to Mobile Phones ( iPhone, Nokia, Samsung, LG and HTC handsets along with the BlackBerry Torch )  and not just Smartphones but also Media Players, iPod and other Multimedia gadgets with display are supported.

Price isn’t displayed but there is a form where you can show interest in purchasing at official site.

How to use TOYin3D to watch in 3D