What Happens If You Don’t Activate Windows 8

Windows 8 RTM (Final Version) is finally out and many computers are already running on it. But, some are still confused with the compatibility issues and Windows 8 Activation Problems. So, I am going to share my experiences and also tell you what happens if you don’t activate Windows 8.

Previous versions like Windows 7 offered 30 days grace period for activation, surpassing which it would start shutting down after 2 hours approximately. Unlike that, Windows 8 eliminated the term 30 day trial in its RTM version.

You will have to enter Product key while installation, otherwise installation will halt there itself. There is a trick to bypass Product Key while Windows 8 installation but I haven’t tried it yet.

You don’t have to do it either because just a Google search for term “Windows 8 pastebin” will help you find Windows 8 product keys. Surely these keys just install it but activation isn’t possible with them.

Coming to the point, what happens if you don’t activate Windows 8, basically there are three things I observed so far:

Most important and annoying thing is the Activation notification which comes as a key symbol on bottom right corner. It is a semi-transparent watermark which is on top of any window you open. It reads as “Activate Windows, Go to PC Settings to activate” and is present wherever you go or whatever you do.

Good thing is, it is far less annoying than Windows 7 where Windows used to open and wallpaper would turn black saying “You may be victim of Software Piracy”

To make you feel better, let me tell you that you can even remove Windows 8 activation watermark easily.

So, what remains is the text “Windows is not activated” under Computer Properties widow. 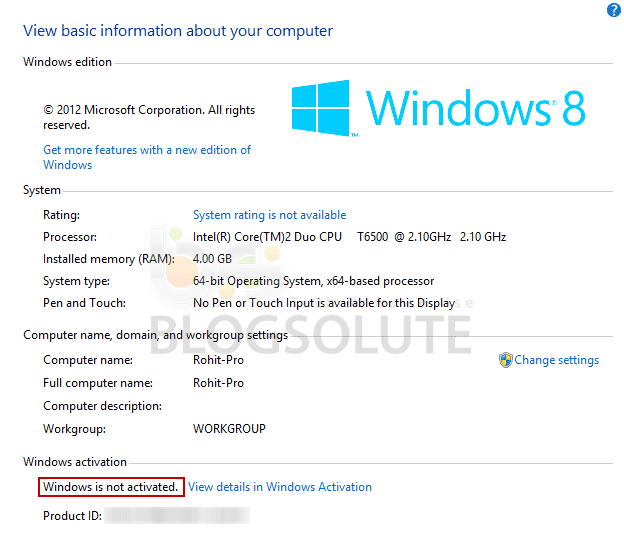 But how often do you open it? And it hardly matters as it never interferes with your work.

Third one mentioned above, appeared once and only once and that too could be closed, like you close Windows 8 Metro Apps.

Personally, I am using Windows 8 as primary OS now without any kind of activation. I kept it running straight for more than 12 hours and no annoying notification or warnings or unusual shutdown occurred.

Maybe this is too early and Microsoft may come up with some nuisance technique offered to you in form of Windows Updates. Like, they did in Windows 7 where WAT (Windows activation Technology) was implemented to catch pirates.

Seriously, there is no harm in using unactivated Windows 8. Let me know if you faced any kind of problem on Windows 8 without activation.

P.S. Motive of this Article isn’t to promote piracy but just to clear doubts in your mind about what will happen if Windows 8 isn’t activated. In fact, I don’t think it really isn’t piracy if you bypass product key and install but then I am not sure.

Not at all Sunil, Whatever you run on Windows 7 runs smoothly on Windows 8 without any compatibility issues.
Even performance would be same but experience of computing might improve. Check First look: https://www.blogsolute.com/windows-8-interface-first-look-live-tiles/17152/ You will get idea about it.

then how many days it may take for kms activator

Wondering when Windows 8 will be available in Belgium?

October 26 2012 is the release date when Windows 8 will be available for general public all over the world.

Alright, thanks for the reply! 🙂

I think You are doing an amazing Job, This is my First stop for Tech news …

U Rock .. Thanks for sharing all the information.

Please help me in activating windows 8 using KMS. We are getting many server address to activate but none is working here in IN. Can you please help me?

I am using unactivated windows 8 now. but it seems like it does not update the windows 8 app store. I mean there are some apps but if i look online at screen shots from other users they have many more apps in the windows 8 store. You know enything about this Rohit?

No, that isn’t a case. When I was using unactivated Windows, I clearly remember entry of new apps for the keyword “music”. App store updates has nothing to do with Activation.

Maybe try install it again, i installed it with one of the torrents and i used a hack/fix.

Hey ROHIT,
i hv a doubt …….. if i install WINDOWS 8 on my PC… den wud i be able to install the required drivers from mY intel CD dat contains it(REALTEK,INTEL GRAPHIC DRIVERS,etc).. like it used to in older versions of windows

Yes Vaibhav, Drivers should be compatible. Chances are that Windows 8 will automatically detect and download required Sound and Graphic drivers for your system.

IF you are able to boot from USB and simply want to switch to Win8 not keeping the XP, then Simply wipe/re-format your hard-disk (keeping a backup of your Files in another storage) and install Win8 x64.

Hi Rohit. I admit i downloaded win8 iso, so dont worry about that. What you say is that if I download Pro instead of enterprise, i could permenantly prevent an activation all along?

Hi Toby,
You cannot actually prevent activation but there is no harm or any kind of interference if you don’t activate.
Downloading Pro or Enterprise doesn’t make any difference. Only thing is you should not download 90 Day Trial of Enterprise which is distributed by Microsoft. I guess this version would stop working after trial period. Though there is a way to extend the evaluation period by re-arming ( https://www.blogsolute.com/rearm-windows-8-enterprise-evaluation-extend-90-days/23670/ ) but still, using PRO is recommended.

Thank you very much, Rohit! You knoe, I used an ISO to get Windows 8, and it skips the whole activation process on the installation. I just wondered if the system would nag me with restarts every 2 hours like it did in Windows 7, but now I know it doesn’t. 🙂

Inserting key while installation wasn’t necessary in case of Windows 7. But with Windows 8, if you somehow manage key insertion during installation itself, you won’t be nagged again. That’s the best part 🙂

Hey Rohit, You are doing a fab job

I just recently formatted my laptop and installed Windows 8, which is not a genuine copy, But its showing activated. I have also turned my update windows off. My question is can I link my windows account to this copy of windows 8. what will happen if I link my windows/hotmail a/c to this windows 8 os. Plz suggest..

Nothing. Linking Live account with Windows won’t affect any activation.

Hey thanks for the great insight and tips. Just wanted to know. And I apologise if I am making you repeat yourself here. I am using windows 8 un activated(I cant activate it, I could only activate it to install). So far I just got the message in the computer properties window, but I have not got the watermark yet. Does it only appear after some time? or have I dodged some sort of bullet? Also, is there any danger that I wont be able to use features if I am un able to activate windows 8? Have you had any problems since your this last blog?? Please reply ASAP! I will be very greatfull. Thank you

There won’t be any problems for any features of Windows 8. Regarding Watermarks, they will appear after sometime.
Only thing you will miss without activating Windows 8 is customization. You won’t be able to change logon screen colors, etc.

thank alot! I super appreciate it………I donloaded the watermark remover and it works, but only for a day or two. Is that normal?

Thanks man…….sorry, one more question……

Obviously I cant activate me copy of windows 8, I have heard some things about a 90 day trial. what happens after 90 days if I dont activate it, I am using windows 8 pro. I hope it will be fine, I have heard that after 90 day, windows will crash every hour until you activate. Is this true?

There isn’t any Trial version on Windows 8 PRO. Microsoft is distributing Windows 8 Enterprise in trial version which may stop working after 90 days but the one you are using won’t.

Thank man, your blog is awsome!

when in installed windows 8 on my laptop my wifi stoped working. its a qualcomm arthos AR5BW222 wireless set. any solutions that you would know of?

Very good article. I am running Win 8 without activation yet. I get updates for windows and apps but i get the full screen thing that says activate your windows and you have to go to pc settings. I don’t after how long this happens.
Thanks for the intersting article.

Windows will continue to prompt for activation with full screen at certain interval of time as I mentioned in article. You just drag the window down to close PC Settings.

I have Windows 8 Final RTM installed and activated. My computer properties show Windows activated but after 30 days I got the watermark on the right bottom of my desktop saying Activate Windows. Why would this be?

Hey, i have a windows 8 enterprise evaluation. I have 29 days left. But i reallly want to have my old win 7 again. How can i get that again? How can i my old win 7 back?
I hope that someone can help me.
-pter777

Hello sir,
I have windows 8 release preview Evaluation copy build 8400(32-bit) as says the watermark at right bottom, I have activated it with a key that I got from Internet, Worked fine for 3months. Now after every 2hrs my lap gets shutdown.
could u please find me solution so that it wouldn’t get off, It would be a great help as I’m losing my ongoing work.
and is there anything the activators of windows 8 could deal with my problem..??
Thanx in advance.. 🙂

Is there best activator for Windows 8 Pro?
And I m not able to install windows 8 in AHCI sata mode in my laptop.
If you want more details I will provide.

hi, already buy a new note book with windows 8 upgraded. but i can’t install any application from the store and when 1st time i turned on the notebook, on the screen appeared the registration for microsoft, so what should I do? did i have to activate the windows 8 too?

Hey , i install window 8 pro , it is not activated yet , but personalise is working , but my usb moden is showing ‘no device’ and so i can’ t able to connect net., pls helpme..

If you have installed the modem software, check from my computer whether the device is still detected as storage device. If yes, just select it. Left click on it and eject. The modem software will start detecting the device..

Hi I installed Windows 8 Pro Build 9200, but now that it needs activation, I want to uninstall this Pro Build. Can I, and if I can, how?

Good article, but I’m a little bit surprised that no one asked what the benefits of activating win8 are?

wow, it was a relief to know that there is nothing to bother about “window isn’t activated’ thing. i can to this post searching for this very answer. thanks!

am having a not activated windows on my pc and mostly i thing that the window is a pirated one. the option is coming for upgrading my pc for Windows 10
so what is your opinion that should i upgrade to it or not..?