BlackBerry is quite a popular Mobile Phone Services and now they have come up with a Tablet called Playbook. BlackBerry Playbook is a Tablet Computer like iPad / Galaxy Tab but manufactured by RIM. More than a Mobile Phone but a handheld computing device.

BlackBerry Playbook has 7 inch LCD Full Touch screen and 5MP Camera. It is powered by 1 GHz Dual Core Processor and runs on BlackBerry Tablet OS (QNX) developed by RIM. Though it has 3MP front facing Camera for Video Calling, lacks 3G but alternatively Wi-Fi can be used. 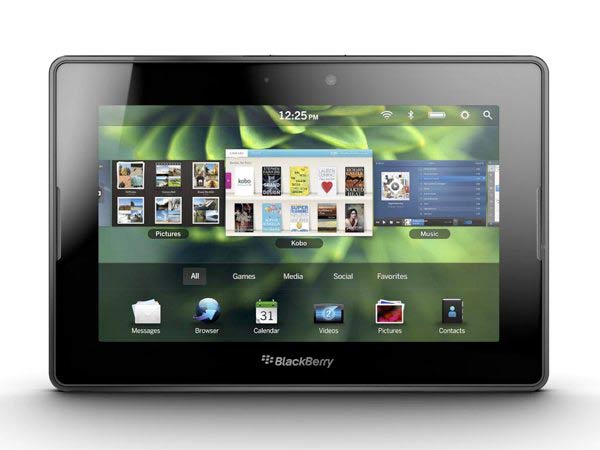 Another impressive application to look for is custom version of PDF reader by Adobe with pinch-zoom support. Bundled with Word, Sheet, and Slideshow to Go from DataVis, giving you the ability to view and create PPT, DOC, and XLS files.

Operating System integrates Adobe Flash 10.1 and dedicated YouTube application. Supports Advanced Multitasking, just swipe the screen to left or right to move on to next app in queue. Interface is quite user friendly as anyone wanted to be.

The tablet also provides amplified BlackBerry experience, which allows you to wirelessly connect to your BlackBerry smartphone for real time access to Email, calendar, address book, task list and BBM. Not to Forget, you can play Games on it.

On Screen Touch Keyboard keys are accessible with thumb keeping hands on side. Last but no least, Copy-Paste Feature is nicely implemented on it.

On the Connectivity side, it has micro USB and micro HDMI port and 3.5 mm Audio output jack. Battery Backup of BlackBerry Playbook given is around 7 Hours.

BlackBerry AppWorld currently has limited apps in stock but Playbook was said to provide Android Apps compatibility. Unfortunately, the models so far in market doesn’t show up. Bringing Android OS compatibility will completely change the face of this tablet.

Where to buy BlackBerry Playbook in India

For online buying, PlayBook is now available on HomeShop18.com and alternatively you can buy it from ShopYourWorld.com

Like iPad, PlayBook is priced according to Storage Capacity.

All of the above are Wi-Fi variants but BlackBerry PlayBook 3G models are expected soon as rumoured on web.

The price difference doesn’t make sense, a difference of 7000 for 16GB of storage space, I’d have expected a maximum of 4000

This is a wonderful device for professionals who have to travel a lot. They can carry all essential data on their move. But it is very sad that it does not have 3G.