We often see Windows version as 64 Bit and 32 Bit. The latter is often used but even wanted to know the compatibility of your system for 64 Bit before upgrading to Windows 64 Bit version. 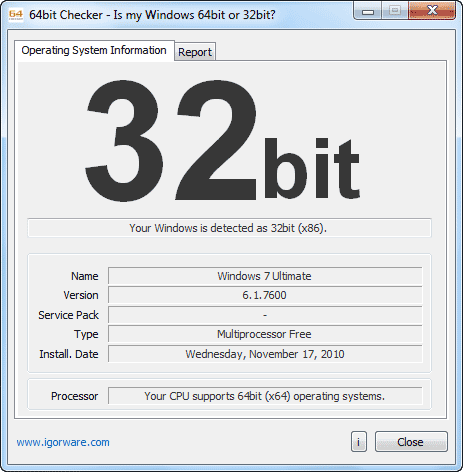 64bit Checker allows you to easily check the compatibility of your computers with 64-bit version of Windows. The reports contain the following data: bits of the system, version number and service pack between pray things can also be exported to HTML and TXT.

The tool is freeware and portable.

Does it tell also if a system is 32bits but can be transformed to 64 bits, or doesnt have 64bits capabilities

Yeah, it also tell you about the capability of your processor whether it will be compatible with 64Bit Windows or not.

Yeah, to all Windows versions.

u can check it from intel rapid storge technology also.

thanks alot it is very good tool