Windows 8 For Android is a Launcher app which tried to imitate and offer Windows 8 styled theming on Android. Homescreen of your phone will be turned into tiles. These Tiles can be used as a single app or even a folder containing multiple apps.

Unlike Windows 8, it has a Start button which opens up the app drawer. 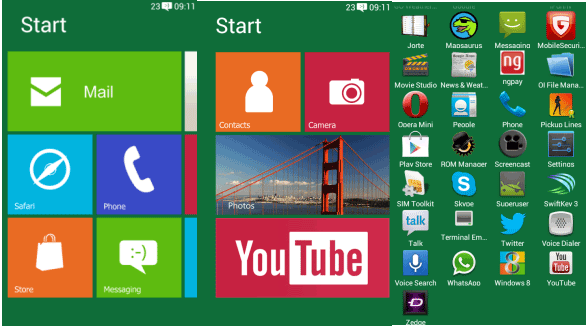 Most commonly used tiles are already on the Homescreen. Like Mail ,Messaging, Maps, etc. however, you have to decide which app to allocate for those tiles. I mean which app should open when we click on those tiles.

There are many vacant tile spaces which could be filled just by tapping and selecting the app.

You may miss notification bar but that’s how Windows works.

Anyhow, Windows 8 For Android could turn your Android device into Windows 8 Best Tablet.

App is recently introduced in Android Play store and it still has room for improvements.

Windows 8 For Android is available for download at a minimal price of $1.99 in Play Store.