Windows 8 Inbuilt Screenshot Feature: How to Play With it

Previous Windows versions too had inbuilt capability of capturing screen or taking screenshot but with Windows 8, it is improved. Unlike, saving the image in clipboard which required you to save in MS Paint like Image editing tools, Windows 8 can capture and save the screenshot image file directly.

Just like iPhone or Android which takes screenshot and save it as image.

Press WIN+PrntScrn button and you will notice screen flickers and screenshot is captured similar to iPhone minus the capture sound.

It should be noted that inbuilt screenshot tool captures complete screen. If you want a tool to capture single window or specific area on screen, you can download ScreenPresso which is a free alternative of Snagit.

All screenshots taken are saved directly as image file (PNG) in a directory. And this screenshot folder of Windows 8 is in Pictures folder which can be accessed from User’s library.

To be more specific: C:\Users\Username\Pictures\Screenshots

Screenshot images filenames are saved in this manner “Screenshot (X)” where X is the number count.

It also works the old way! This function not only saves the screenshot as image but also in your clipboard. So, go to Paint or any Image editor and click Paste to get the image there instantly.

Last tab is “Location” where you can see a “Move” button. Click on Move to set new directory as Screenshot saving location. Click Apply to save the changes. 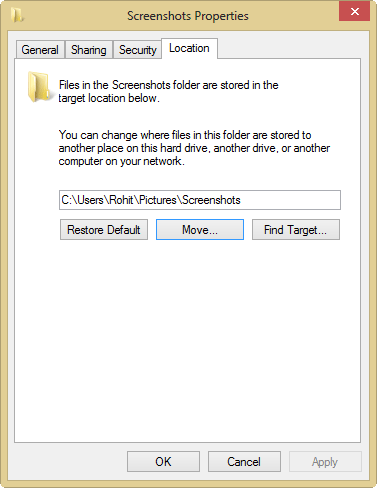 While applying changes, you will be asked whether you want to move existing content to new directory or not. I will leave this up to you.

Click either Yes or No, future screenshots will be saved at new location specified.

I noticed that even after deleting previous screenshots file, Windows 8 doesn’t forget the count. This can be problematic or in better word “irritating”. But, here’s a trick with which you can reset the capture count of screenshots in Windows 8.

Capture count is saved in a registry which has to be over-written to start from 1.

To do that: Go to Registry Editor – Press WIN+R >> Type “regedit” in Run command. Navigate to:
HKEY_CURRENT_USER\Software\Microsoft\Windows\CurrentVersion\Explorer 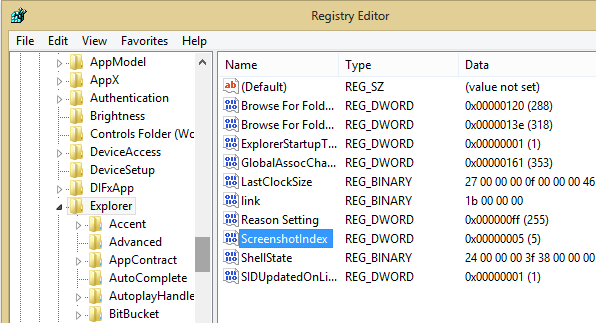 On right side, you will see a key named “ScreenshotIndex”. Right click on it and select Modify.

Change the value to 1 and press OK. 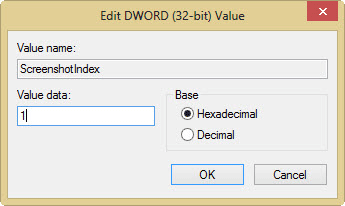 Don’t worry, if there is already a file with same number, counter increments automatically and image is saved with next number in file name.

If going to long process looks tedious, you can download a registry key to Reset Windows-8 Screenshot Count in ScreenshotIndex key. Open the zip folder, it contains one registry key which can reset count by just double clicking on it.

Were you already aware about this hidden feature of Windows 8?

For captures you can also use the snipping tool in Windows 7 and Vista Home Premium and up and in Windows 8.
Its better to use default tools rather than installing other software.

Thanks for the Tip. That’s really easiest way. BTW does windows 8 have any feature that can capture video recording of the screen?