Though not an open source system but Windows users have always leaded an unrestricted life. Then, why will they compromise with Windows 8. This was bound to happen, how can Windows 8 store Metro apps remain uncracked.

Everyone knows that eventually, hackers will find a loop hole and bring a working crack for Windows 8 App Store. And something similar happened.

Hacker at MDL Forums has released a tool thanks to which any trial app downloaded from Windows 8 Store apps can be converted into full version for free.

Some developers offer a trial of a paid app on Windows 8 App store. These can be used for a certain period of time say 7 days or so. After which, they stop working and you will have to purchase it in order to continue using the application.

Tool called wsservice_crk_src can break this restriction and lets you use the application forever.

Take an example of iPhone where you will have to jailbreak in order to install cracked apps (Paid apps for free). It is similar to that. Some Windows 8 system files are patched to crack Windows 8 App store security. Windows8Core called it Modernbreak.

Also, the files of app are modified which includes signature, license, documentation, etc. Codes in Apps are modified in such a way that it no more prompts you for buying when trial period ends.

Can we get Apps with BUY only option for free

It’s only available for those apps which are being offered as trial. You cannot get the BUY version of app for free. Maybe, it is possible through sideloading in which full version of app can be installed without app store.

Also, Hacker has included a feature called “Make Redistributable” in his tool. If you have purchased an app from Store, you can prepare a redistributable application which can be installed on any system using sideloading.

How to use Crack Tool

Out of curiosity, I tried the tool to convert trial version of a Windows 8 app to full version. Tool is quite sophisticated, It is just a one click process. 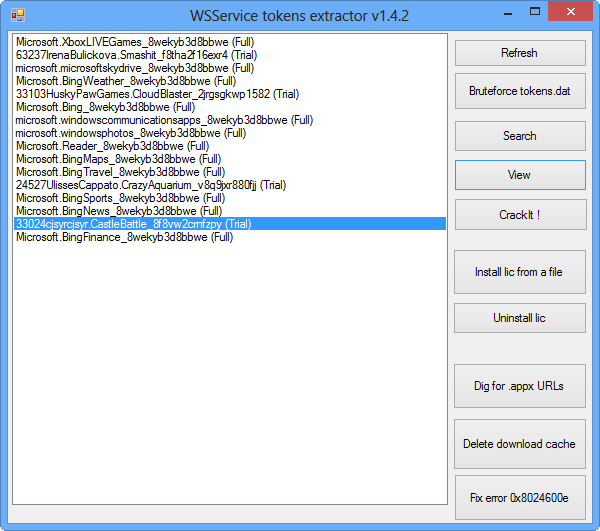 Will I be able to Update

Cracked app won’t be liable any more to receive free updates from App store. Reason is obvious that Microsoft will check the signatures before delivering updates. And the installed app has everything modified.

Still, there is a workaround for it. You may uninstall the cracked app completely and reinstall app from Windows 8 store. Now, crack it again using the same method.

Can Windows RT Apps be cracked

No. The tool is a Win32 application so, it won’t run on Windows RT as it is based on ARM architecture.

Should you Try it?

I would recommend not trying it. Not only because it is against Microsoft’s policy but also it is risky. Patching requires some knowledge and you are risking your Computer’s security and privacy to a 3rd party software. By chance, if you get caught by Microsoft, your Windows account may get closed.

This is a second big blow to Microsoft after a loop hole discovered in their giveaway which did Windows 8 permanent activation for free. Hope, they release an update patch to fix this loop hole.

On other side, I think it is unstoppable because Piracy is inherent in digital world. Every action will have an equal and opposite reaction.

If this continues, it is most likely that you’ll have software providers moving to a complete paid / free concept with no trials similar to most apps on the Mac store.

You’ll need to buy it if you want to use it.

how i can download this Tools and thank you

I hope it will conflict when it would be in update mode.