No matter which Windows version update came, there are still some of our readers sticked to Windows XP. Sometimes, the reason is the compatibility of software programs they use or low system requirements compared to Vista and Windows 7. In this course, they miss out the flavour of updated Windows interface but transformation packs come to rescue.

Windows 8 interface is in talks since when its official teaser was released. We have already seen How to transform Windows 7 to Windows 8 bringing Live Tiles interface.

And now, even Windows Xp users can take advantage of transforming their OS interface into Windows 8. Though, not bringing all the sophisticated features like Windows 8 Live Tiles but atleast imitate appearance by tweaking many basic features.

How to transform Windows Xp to Windows 8

Installer is just 19.2 MB but takes 182 MB of space on Hard Disk after installation. It replaces almost all system files responsible for Windows XP Visual appearance. 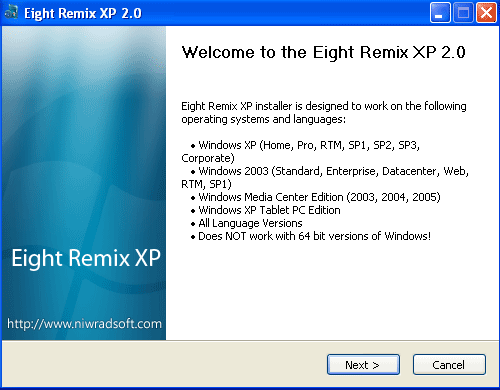 Make sure you check on “create restore point” as we are going to change System Files. Installation takes quite long to complete and you will need to restart the system to take effect all the changes made.

Right from Logon Screen, you will start experiencing changes visually. Start button, Taskbar and Window Interface is given a glassy look. There is a ‘Show Desktop’ button like thing at the right-end of taskbar but it isn’t actually. You can install Show Desktop button on XP however afterwards.

Program features a nice tool called “Reloader” which will reset all the icons and appearance changes in case you or Windows Update mess up something with system files.

Also, it has clean uninstall option which will remove all the components of Remix Theme and revert back to default Windows XP theme restoring all default theme files in case you feel like.

Note: This is a standalone program and no manual tweaks required. Compatible with all variants of  Windows XP 32 Bit and Windows 2003. Doesn’t Support 64 Bit Windows OS.

very good transformer pack i wanted to install it

hey i have installed 2 windows
xp and win 7
but when i aplied this tranform package on windows xp, after rebotting my windows get corrupted it keeps on restarting before welcome screen
now i am working in windows 7

Is there any way, by which i can resolve my windows xp either through windopws 7 or other without losting my windows 7

I too have dual boot but didn’t face such problem.
Well, you can uninstall the package from XP which will result in restoring of default files and then I hope Windows 7 will be Fine.
In dual boot, OSes are located different drives so there should be no file sharing but I am wondering how can that happen with you.