How to survive without Antivirus on Windows Computer

Today, nothing is valued more than safety. Frightened by the news about hackers and viruses, you cannot move the mouse without being entrenched by shields and constant security analysis. Life without an antivirus seems unthinkable (atleast on Windows Computer).

However, it is possible to live without antivirus. Without Antivirus installed, the need for a spending the resources of our computer no longer exists. And then the computer wins in speed and avoid major hassles, such as false alarms.

Why live without antivirus? More performance and stability.

The first has to do with performance. Most antivirus need plenty of memory and computing power to conduct its surveillance. In some cases, consumption of memory that can reach 100 megabytes too. 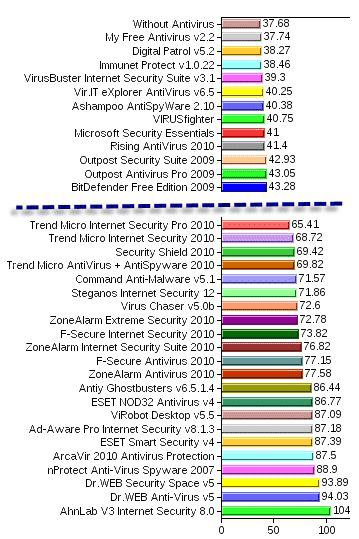 This graph taken from Raymond’s Blog shows the startup time of Windows with various antivirus programs. Although some are highly optimized, such as the Microsoft Security Essentials, but most add 30 to 40 seconds to boot time. A time that many consider unacceptable.

As for stability, the presence of a virus that constantly monitors files can interfere with the operation of programs and games. The false alarms, arising from the use of heuristics aggressive, confuse the user and can lead to disastrous events such as the deletion of system files.

Antivirus are useful but do not replace Common Sense

Virus has changed and no longer try to delete files or cause panic, but present themselves as legitimate programs and deceive the user in social networking. Virus writers now prefer to earn money and gain the trust of the user instead of destroying your computer.

In the case of zero-day attacks , the effectiveness of the best antivirus is down more than half. The following chart, published by security expert Brian Krebs in his blog, shows the blocking rate of the ten best antivirus to an unknown threat. The result: Most antivirus takes two days to react . 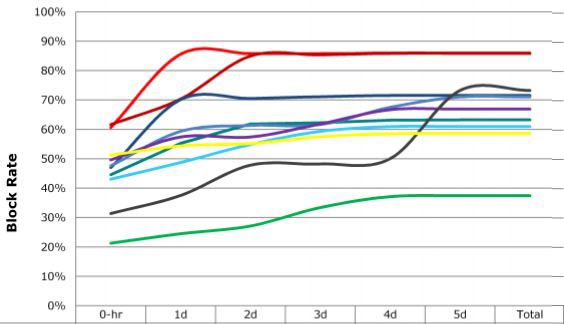 If you think, then, that an antivirus will protect you 100%, we will have to give bad news: no antivirus protection ensures complete 100%. Alfred Huger, Chairman Immunet , summarizes the situation with a great metaphor:

People should understand that antivirus is more like a safety belt to an armored car , an accident may save your life, but maybe not. There are things you can do first to make sure you do not have an accident, and those are the places where you put all your attention.

Antivirus is therefore a great helper when it comes to keeping the system safe, but not an infallible remedy.

Are you sure to Uninstall Antivirus?

Before removing the antivirus, you better your computer skills with everything necessary to prevent infection easier. We suggest you the following menu, composed of these ingredients:

How to get rid of antivirus

If you’ve decided to give up antivirus, a type of program particularly hard to remove, uninstall it with Ashampoo Uninstaller or Advanced Uninstaller. If the Windows Action Center gave you the error with no antivirus installed, Disable messages about virus protection from Control panel >> Action Center. 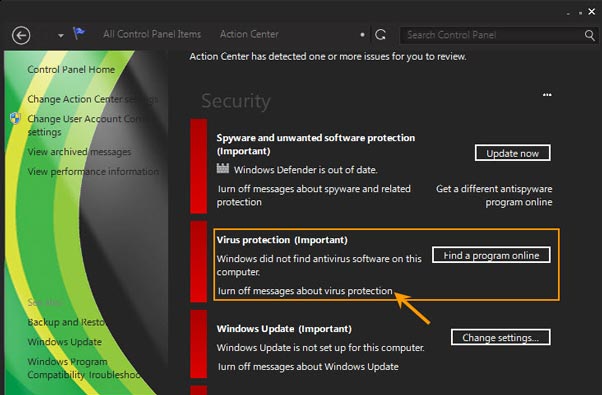 Turn of Notification about Virus Protection

The utilities that we have recommended are not sufficient to avoid security problems. We need a final touch, common sense. Here’s our list of recommendations:

Am I recommending not to use Antivirus?

No. What this article aims is to discover the antivirus, though useful, but not remedy to cure everything, and that protection is primarily in your hands. Your use of this information depending on your skill level with computers. The choice is yours.

Do you prefer to use Windows with or without antivirus? Have your say by commenting below.

I have been living without anti virus for a year now. Its better without antivirus, only need if windows if that badly effected and i have no back up

You can always rely on cloud services like Dropbox for backup of important files. Rest everything is fine as long as you are alert enough and tackle things manually.

But the other important installed file will be corrupted!!

Risk is always there Prakash, So, it would be better if you use On Demand Scan using CD every weekend or fortnight. I guess that would reduce chances of getting exposed o Viruses.

Thanks Rohit sir for this.

.
I’m living without anti virus,
but sometime we have to control what application will be used,
and if you connected to the internet
you have to beware.
.
Thank’s.

Hey mukhdi, You need to keep enabled Windows Firewall which is built in which can create rules for applications connecting to Internet.
Also, use Trusted software from Reliable sites so that you are always on safe side.

That’s a great post, Rohit! So basically it is for intermediate or advanced Windows users.

Yes Antony, You can say that but Blogsolute always try to make Computing easy even for non-Tech-Savvy.
In this case, however, I won’t recommend giving up Antivirus Protection if you aren’t experienced Windows user who is well known of various common problems.

What you are saying is exactly right. There is nothing impotant to use an antivirus. Just for extra safety over internet. People who are not using internet they no need to insatall an antivirus program

It’s not just internet but USB Drive from your close friend can also bring unwelcome guest on your Computer. So Beware and follow other recommendations too.

I hv been usng ma pc witout ny antivirus nd it works perfctly 5ne..
And i use sandboxie 4 watevr i want 2 play wit new appz coz its just realy wrk as a sandbox nd u can c wat files r being creatd by that partculr app..

Thanks for that nice article.
Quite good for slowpc performance. But still having an antivirus will still be a nice recommendations. Its just like antivirus software in the frontline. But for slow specs computer you may use antivirus that are light. I suggest freeware. Its not eating too much RAm in your computer. Also it can also be a good recommendation for not an on-demand scanning antivirus to less memory usage. just like clamwin as you have suggested.

More power on this blog.
And keep on providing good article as such.
Worth reading sir.
🙂

Thanks SB. As you are now considering low configuration PCs, I would recommend using Cloud Antivirus like Panda which doesn’t downloads all database on Hard Disk and scans using Cloud Technology.

First you tell me which antivirus or internet security you used

Personally, I would recommend Norton 360 or Kaspersky.

It is natural that lots of people using antivirus without genuine key, you know that what i mean. In this mode your guidance is really very helpful. Thanks Rohit

I would advise that for clear communication that you have someone proficient in the english language edit your blog.It is difficult to understand you as you make many grammatical errors. That said thank you for sharing your knowledge.

Back-up all your precious stuff on a regular basis onto an external HD pref.That way if you get a virus that has left your rig beyond repair you can re-install Windows.Safe in the knowledge that you have lost nothing of value or importance plus you get a lovely clean slate to start a-fresh.Haw haw = WIN Thats my mindset anyroad.Everybody else will have their own way of doing things.I used to enjoy having Comodo Firewall as an extra safeguard but they gone n changed it for the worse,sound familiar ? Finally if I was to use any AV I would choose Avira.If paying then ESET.Its a great article though guys and sound advice as ever.Peace

Exactly Roggenwolfe, if you keep regular backups, there is nothing to lose.
This way, you can always risk if you want to.
Even I used to Comodo in 2010s as extra security to the system but slowly moved to BitDefender which offer Malware protection as well as Firewall.

Yeah, I live with it having no antivirus because this software only slow downs your computer having a mid range PC. Also, it blocks programs as you wanted them to run smoothly and no problem but with antivirus blocking it, it simply pisses me off.